The bestselling romance novel that bought its author a dream house 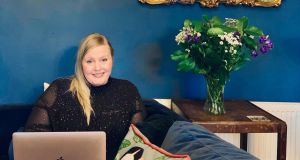 Josie Silver at home in her dream house

Best-selling author Josie Silver has a very nice home. The house, which she describes as rather dreamy, is a structure of two halves: an original 1853-built Victorian three-storey with a 1920s-built add-on. It’s a solid, room-deep house with no halls and lots of nooks and hideaways, where spaces lead into each other through doorways and staircases.

Outside, flanking the front door, an ancient wisteria climbs the walls from its bulging base, making the residence a picture-perfect vision at the height of summer. The house, which Silver calls her “chateau”, is surrounded by gardens which throw up lots of different areas. There are “secret” caves, a pond, a woodland walk. All in all, says Silver, “it’s like something out of a romantic fairy tale.”

It’s an apt and accurate description. The idyllic Wolverhampton house, which she shares with her husband, James, and their two teenage sons, was paid for by the proceeds of Silver’s most successful romance novel, One Day in December.

One day in June

It was on a day in June 2015 that Silver first set eyes on that dream home. It was, she says, “love at first sight”.

The rambling, characterful pile, with its abundant, eclectic gardens, was at the end of a lane on the outskirts of the west midlands town of Tettenhall Wood. It was only a few miles from where Silver had grown up, in a spot she would have regularly driven past; but it was tucked away down a cul-de-sac, where it wasn’t visible from the road. Going through the gate and up the path that revealed the house of her dreams was something of a surprise for the penniless, daydreaming house-hunter.

“It was for sale. It was everything I could have dreamed of. We just couldn’t afford it. We tried to raise the money for the asking price, but didn’t manage it.”

A change of luck

Call it romance or luck or whatever, but Silver’s real-life story started to weave a bit of magic. Writing under the name of Kat French at the time, Silver had been scraping a living as a romantic comedy writer with HarperCollins. She was at a gloomy point where she was starting to doubt herself. With 12 novels under her belt, she still didn’t know if her writing career was going to be financially sustainable. She’d worked in the civil service before and was contemplating putting herself back out into the more lucrative job market.

And then, at a point when Silver couldn’t afford to get her fridge fixed and was using an ice-box to store food in, Katy Loftus, a commissioning editor at Penguin Books, spotted Silver’s work. Loftus commissioned her to write a feel-good Christmas romance. The resulting million-copy bestseller was to change Silver’s life.

It was 2018. With luck coming her way, Silver’s bank balance was about to tip the scales in the right direction for a change. As even further good luck would have it, the house came back on the market. It was put up for auction and, while Silver’s hopes were initially high, they were set to be dashed again as her cashflow wasn’t quite bursting its banks yet. The auction went ahead without her.

Silver’s flow of luck, though, wasn’t giving up yet. When the auction didn’t yield a buyer, the house was available again. This time everything was in order.

“Because the house was on the market as an auction property, we had to go through actually technically buying it at auction, but we were the only bidders.”

That surreal experience involved herself, James and their two boys, Edward and Alex, sitting in a room with the auctioneer while he went through the motions, complete with the dramatic moment when he brought the gavel down with a flourish.

While Silver and her family didn’t have far to travel in terms of geography, the move was transformative. The house they left was an ordinary three-bed semi, but the house they were moving to, just a few miles down the road, was like stepping into another world.

“We were moving to this big old house. It’s like a grand old dame. It’s beautiful and we love it. We’ve been living in the house for over two years now, but it’s an ongoing project and there’s still lots to do. The kitchen is the next thing we need to tackle, but I’m very busy at the moment, so it’s hard to find time to get to it.”

While the kitchen needs ripping out and replacing, the rest of the house is very habitable and has been decorated to create a sense of tradition, cosiness and longevity. The main livingroom has parquet flooring and French doors which open out to the garden. It makes it, in Silver’s words, ‘an inside outside room.’

Another little room off that, like a snug, is a spot where the family congregates on cold winter nights. From there a door leads into the biggest room on the ground floor, the family room/cinema room.

For her sons, the house has opened up their lives. With four good-sized bedrooms and an area that can be used for a fifth bedroom for guests, the difference in terms of space is immense.

In their previous home the boys shared a room, with the third bedroom given over as Silver’s office. In the new home, not alone did each boy get a room of their own, but they now have an entire games room on the third floor of the house.

With Silver’s next novel published in early March, she is already stuck into novel number 14. It’s the first one she’ll have written entirely in the new house.

“It’s been written inside and out. I had a garden office built so I can go out there to work, but be able to look up at the house. That’s going well, but I still find myself writing all over the house.”

Silver describes some of her favourite writing spots. The window seat in her bedroom, the boys’ games room at the top of the house where she has a wonderful vantage spot. She describes the room at the end of the house where, in summer, the butterfly windows open out to let in the sunshine and fresh air. The house, she says, will feature as a backdrop in her future writing.

With the launch of a new book behind her and deadlines looming for novel number 14, Silver says she is somewhat “shackled to the desk”. It’s an imprisonment she’s not complaining about. With breakthrough success in her writing, and the house of her dreams finally falling into place, Silver says she has the best of all things in her life. She’s happy in every way, has the joy of a great family life, and romance on and off the page.

She won’t, she says, be leaving her idyllic life and her beloved, beautiful home any time soon.

Josie Silver’s latest novel, The Two Lives of Lydia Bird, is out now from Penguin