Meet the man who will redesign the US ambassador’s house

'No beige', says Carleton Viney, who has been asked to redesign the next US ambassador's Phoenix Park residence 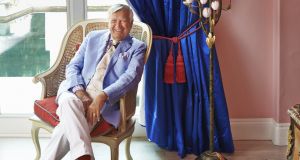 Brian Burns, Donald Trump’s choice as the next US ambassador to Ireland, has asked US interior designer Carleton Varney  to revamp Deerfield, the ambassador’s residence in the Phoenix Park in Dublin. Varney says the revamp will result in “a homely experience, while at the same time retaining the tradition of a ceremonial place”. Here’s what else Carleton Varney said in a recent interview with The Irish Times. (Burns’s appointment as ambassador has yet to be confirmed.)

A Co Limerick home graces the glossy pages of a new interiors book called On The Waterfront, which features a selection of houses and hotels set on water in exotic locations from Japan to the Caribbean.

Shannongrove House is an 18th-century Georgian property belonging to American decorator Carleton Varney, owner of the upscale decorating company Dorothy Draper & Company and author of more than 30 books , who will be in Dublin next weekend to talk at the Irish Antique Dealers Association’s fair in the RDS.

Varney has owned Shannongrove since the early 1960s when he first visited Ireland for a client, the wealthy Irish American Bernard P. McDonough, who had made a fortune in building materials.

It was 1962 and McDonough had just bought Dromoland Castle. He was, Varney says, one of the richest men in America, and Dromoland’s transformation into a luxury hotel “started an interiors revolution in Ireland”.

McDonough also built the Clare Inn, the Limerick Inn and Shannon International Hotel and asked Dorothy Draper & Company to decorate them all. Indeed, Varney redecorated Dromoland again in the 1970s.

Varney first crossed the threshold of Shannongrove when he was invited to dinner there by its then owner a German baron. Joining him at the table that night were movie director John Huston, father of Angelica, and Elizabeth Graham, better known to the public as Elizabeth Arden.

“It was a magical place to come to on a July evening,” he recalls, so much so that when the house came on the market, having been briefly owned by an English lord, he decided to buy it.

“I bought it from a memory,” he says and set about restoring the house, which is on the banks of the Shannon, using the riot of colour in the garden as his inspiration. The hall is a sunny yellow, a colour Varney calls a neutral shade because it can be paired with green and with red. This particular tone has been given the name Shannongrove yellow. Varney’s status as the foremost decorator in America comes from the fact that he is the owner and president of Dorothy Draper & Company, a brand whose eponymous founder created a very distinctive style of decorating that has become as integral a part of 20th-century design as Rococo art was to the 18th-century and Regency to the 19th-century.

The company still bearing Draper’s name has decorated the White House, the homes of stars of Hollywood’s golden age and captains of industry.

“Mrs Draper made interior design a business,” Varney explains. “She created a look; baroque in style, it was all about big Rococo mouldings, magical colour and black and white floors.”

Her palm prints, strong use of colours such as cranberry pink and duck egg blue and black and white checkerboard tiled floors have all become signatures. So much so, that 10 years ago the Museum of the City of New York held an exhibition called The High Style of Dorothy Draper.

The company in effect invented the look now known as Hollywood Regency – a polished finish that is back in vogue and contrasts a bold use of colour with glass and metallic accents that spells both opulence and comfort.

It’s a style that has been much copied. London-based House of Hackney is just one of many décor companies that has paid homage to her style, one that will have modernists running for cover.

Born into a wealthy and privileged family, America’s most influential tastemaker was well connected which helped her build such an impressive client list which included actresses Joan Crawford and Fay Wray, of King Kong, and fashion designer and socialite Gloria Vanderbilt. The firm decorated the White House for President Jimmy Carter.

Varney first met Draper in his mid-20s through a mutual friend, Blanche Knopf, who was president of the Alfred A Knopf publishing house which represented writers such as Albery Camus, Sigmund Freud, Jean Paul Sartre, Simone de Beauvoir and Thomas Mann, and whose authors won 27 Pulitzer and 16 Nobel prizes.

He learned the business from the ground up doing everything from vacuuming floors to running errands. He says his relationship with Mrs Draper was “like Karl Largerfeld was to Chanel”, and he bought the company in 1964, five years before Draper died.

But he never set out to be a decorator.

“I wanted to be a set designer on Broadway, ” he says and that sense of dramatic detail is integral to his design work which includes Stairway to the Stars for London’s Palladium Theatre and the Green Room for the 2008 Oscars.

Now in his late 70s, he’s showing no signs of slowing down. He’s written more than 30 books, mostly decorating titles, but his bibliography also includes a clutch of works of fiction.

His 2011 book Mr Color introduced him to a whole new generation weaned on the good taste greys and minks of Farrow & Ball. Opening its pages was like opening a window on another world. “We don’t do beige and grey,” he explains. “Our basic look is the magic of colour.” Decorating is not about furniture, he says. “It’s about the background home and it should look finished before the furniture ever goes in.

“To effect this, you have to factor in the ceiling colour and wall colours. Dressing a room is all about the detal. It’s like putting together an outfit to wear. You start with the basics, a blouse and skirt, and then you factor in a jacket, perhaps a scarf, jewellery, a bag and shoes. It doesn’t have to be matchy matchy but it has to have continuity.” So if, for example, one room is painted yellow, then he will pick out that colour in an adjoining room, in the ceiling say, and then carry the colour through to the woodwork on the stairs and up into the bedroom where it might become the colour of the ensuite.

It could be said that it is colour, not blood, that runs in his veins.

“Children are not afraid of colour but, as we age, something happens to that sense of freedom. We become more and more intimidated by it. I have only one rule for my staff: ‘show me nothing that looks like gravy’.”

He doesn’t just mean the brown of traditional Irish gravy – more sauces of any kind. There are several kinds of gravy, he says and his loathing extends to all the beiges and creams it can inhabit.

Of all the shades in his paint box, he says his favourite background colour is a greeny blue that is similar to the colour Newbridge Silverware use in their packaging – a company that has invited Varney aboard to design a new silver home collection that it hopes will launch the brand in the USA with a bang in October 2017.

It’s a genius move – marrying the leading light in American interiors with an Irish brand that worships the silver screen of Hollywood’s golden age.

What gives Varney the edge on the new generation of decorators is that his background is in fine art and antiques so he knows how best to weave these pieces into a home. He tells clients “rooms have to have a touch of yesterday, a touch of now and room to grow”.

“It isn’t a formula,” he says. “Nothing is set. It’s not about acquiring things but rather setting a mood. There isn’t such a thing as good or bad taste. Only what is pleasing to one isn’t pleasing to another.”

Working with clients he gets to know everything about them and, to get the most from his services, he says you need to be honest with him. “I can walk into somebody’s house and can tell you who lives there even to what’s in the bottom drawer of the dresser (bedside cabinet).”

nCarleton Varney will be giving a talk on “Decoration Around Your Personality” at the Irish Antique Dealers’ Fair at the RDS in Dublin on Friday, September 23rd and Saturday, September 24th at 2pm on each day. Entry is €10. Present today’s copy of The Irish Times and you can access the lecture for free. Places are limited and will be given on a first-come basis. Visit dorothydraper.com and iada.ie

nOn The Waterfront is published by Rooster Books in early November.