Some wonderful walled gardens to visit this year 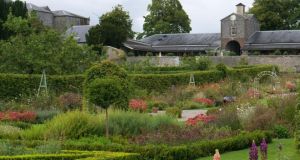 It’s safe to say that spring – after displaying an altogether shocking tardiness – has finally sprung, Now is the time to get busy sowing, hoeing, weeding, watering, and when you can snatch a few hours away from your own plot, to start visiting those of others.

With a network of trails established around the country, an abundance of wonderful gardens, both public and private, are opening to visitors to provide inspiration, relaxation, an opportunity for gentle critique (tut-tut ) or simply an afternoon’s pleasant escape.

You can visit some of Ireland’s many glorious walled gardens, those centuries-old survivors of the Big House era that flourished from the early 1800s right up until the beginning of the 20th century, many of which have been painstakingly and lovingly restored in recent years.

One of the finest is the magnificent six-acre walled Victorian garden of Kylemore Abbey in Co Galway (kylemoreabbeytourism.ie), built by the wealthy British MP, Mitchell Henry in the late 1860s. Restored to its former glory in the late 1990s, every variety of plant grown within its walls was cultivated in the Victorian era, including heritage varieties of potatoes grown in raised “lazy beds” by head gardener Anya Gohlke and her team.

Just as Kylemore is known for the windswept beauty of the surrounding landscape, so too is Glenveagh Castle in Co Donegal (glevaghnationalpark.ie), where a walled kitchen garden filled with flowers, herbs, vegetables as well as a quaintly pretty cottage lies at the heart of its extensive, world-famous 32-acre gardens. Keep a particular eye out for the giant Gortahork cabbage, a rare Donegal variety that Glenveagh’s head gardener, Seán O Gaoithin, played a key role in preserving.

Also in the north of the country lie two other walled gardens that I’ve written about in the recent past, Glenarm Castle and Benvarden, both situated in Co Antrim.

Designed as a series of interlinking rooms, Glenarm (glenarmcastle.com) features fruit, flower and herb gardens, formal water features and a fully productive kitchen garden, and is home to possibly the most perfectly manicured stretch of lawn in Ireland, pristinely maintained by head gardener James Wharry and his brother Billy. Over 8,500 tulips have been planted in the garden as part of its annual tulip festival, which this year runs from Saturday, May 4th to Monday, May 6th.

Less than 40 miles away is the walled garden of Benvarden (benvarden.com) restored by its owners Hugh and Val Montgomery and now tended by head gardener Billy McMath. Its centuries old, 1.5-acre kitchen garden is used to grow a great variety of fruit and vegetables, while adjacent to the kitchen garden is a second walled garden, an evocatively scented place filled with roses, a fountain and a Victorian glasshouse.

Meanwhile, in the heart of Ireland’s capital city and the centre of Dublin’s Phoenix Park lies Ashtown Demesne (phoenixpark.ie), home to a beautiful Victorian walled garden that, having written about it and its hardworking gardeners for this paper for several years, will always be close to my heart. Now in the final stages of restoration, its two-and-a-half acres contain a remarkable range of fruit bushes and trees, cutting flowers and vegetables. A free guided tour takes place on the second Saturday of each month, beginning at 10am.

If possible, try to combine any visit to Ashtown’s walled garden with a visit to the nearby walled garden of Áras an Uachtaráin (phoenixpark.ie), the official residence of the President of Ireland, where you can enjoy the sight of statuary, box-edged flower borders and a scrupulously restored Richard Turner peach house. Although free tours of its organically-certified gardens normally take place each Saturday during summertime, it’s important to check arrangements in advance with OPW.

To discover another of the city’s best kept secrets, you need only travel a few miles from the Áras to Marlay Park’s 4.5 acre regency walled garden in Rathfarnham, a tranquil refuge hidden behind high walls next door to the park’s busy tearooms (dlrcoco.ie). Restored under the Great Gardens of Ireland Restoration Programme, it contains an orangery and a series of intricately planted herbaceous borders and shrubberies.

In the rural midlands, you’ll find two further gems – the very lovely walled gardens of Castle Durrow in Co Laois, and the walled garden of Altamont in Co Carlow, (carlowtourism.com) where nurseryman Robert Miller has created a series of stupendously beautiful herbaceous borders. To see these at their best, visit in mid-summer.

Finally, in Co Waterford in the far south of the country are the fairytale turrets and historic walled gardens of Lismore Castle (lismorecastlegardens.com), which has been in the private ownership of the Devonshire family for generations.

To see further details of Ireland’s garden trails and the gardens open to the public this year, see the website of The Irish Garden magazine (garden.ie).