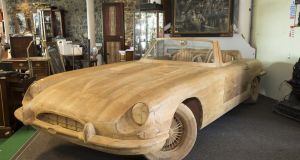 The almost life-sized wooden E-Type Jaguar which sold for €4,000 in a two-day sale as part of the Café en Seine contents auction. Photograph: Michael Donnelly

It seems a touch of royal sparkle can still work monetary magic. A replica of a classic E-Type Jaguar – the car used by Prince Harry and Meghan Markle at their recent wedding ceremony – sold for €4,000 as the contents from one of Dublin’s most iconic Celtic Tiger venues , the Café en Seine pub, were auctioned off this week.

The three-quarters-lifesize wooden piece, which comes complete with sculpted front grille, detailed multi-spoke wheels and a perfect interior including a working wooden steering wheel on a rolling chassis, was one of the main attractions at the opening session of the two-day sale at the Heritage Hotel in Killenard, Co Laois.

The auction ran to some 3,000 items, including many of the spectacular mirrors, bronze statues and giant urns from Café en Seine’s famously over-the-top Paris, 1900s-style interior.

“Anything decorative or a bit quirky is attracting big money,” said auctioneer Niall Mullen, who last year held the largest auction in the history of the State when he disposed of the contents of the Central Bank. “The car is true in every detail, it’s an amazing folly and a stunning copy of the real thing.”

There were plenty of outsized results at the sale, including a set of 1940s petrol pumps converted into a cocktail cabinet – winner of The Late Late Show’s antique restoration competition on RTÉ television earlier this year – which sold for €7,500.

Mullen conducted the sale in partnership with Victor Mee auctioneers.

The mammoth sculptural pieces from Café en Seine were particularly sought after: a bronze figurine holding a torchere made €4,200 and Coming Through The Rye by the US sculptor Frederick Remington, whose Bronco Buster statue sits in the Oval Office at the White House, sold for €4,200.

Other results from the sale include a Belfast street scene by the Royal Ulster Academy artist Brian Ballard (€5,400), a bronze lady fountain on a pedestal base (€3,700) and four extremely rare Guinness Japanese advertisements from the 1950s (€3,000).

A collection of 20 red-and-cream striped art deco Morris Minor chairs from the upstairs space in Café en Seine sold for €750 each.

“The big thing is that the Café en Seine name carried so highly through the two days,” Mullen said after the sale. “All of the bronzes, all of the lighting – everything has gone beyond its top estimate; not one item went unsold.

“My dad was an auctioneer for 50 years. He passed away five years ago, and he’d be sitting in absolute amazement at what is making money – and what’s not making money. It’s all about re-using high-quality items, and it’s all about being different.”

As for Café en Seine itself, it’s not the end of the road for the pub. It’s now owned by the Mercantile Group, which plans a €3 million refurbishment in an art deco style, reopening in November.

Childcare: ‘So, you go out and take the child kicking and screaming from the car?’
Real news has value SUBSCRIBE