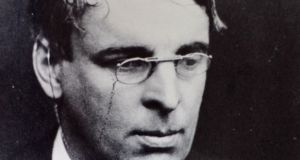 The ‘pince-nez’ (a French term meaning ‘pinch-nose’ for glasses with no arms that are held in place by pinching the bridge of the nose) were a trademark accessory of Yeats who was famously photographed wearing a pair.

The glasses, which the auctioneer said had “a few minor scratches”, were among hundreds of items in a sale at Fonsie Mealy Auctioneers described as “the final chapter” in the disposal of the ‘Yeats Family Collection’ – art , antiques and collectibles inherited by the adult grandchildren of W.B Yeats.

Many of the more valuable items had already been auctioned in September at Sotheby’s in London where the poet’s writing desk sold for £187,500 (€214,000) to an unnamed Irish buyer.

At Tuesday’s auction, which lasted a marathon nine hours, bidders in the saleroom faced strong competition from online and telephone bidders.

The top art lot, described as “The Original Mosada Portrait” by John Butler Yeats sold for €21,000 – three-and-half times the top estimate of €6,000. The pen-and-ink portrait of his son W.B. Yeats, is dated 1886, and was reproduced with the narrative poem, ‘Mosada’ in the poet’s first publication.

A pocket sketch book from W.B Yeats containing some 50 pages with drawings and several passages of writing sold for €17,000 – over three times the top estimate . An Edwardian silver inkwell used by the poet made €2,900 – against a top estimate of € 800.

A briefcase – showing signs of wear and tear – that was owned by the poet and inherited by his son the late Senator Michael Yeats sold for €3,400.

Even very humdrum lots found buyers. Lot 284, catalogued as “a bag of varied children’s clothing” sold for €40 while Lot 288, a mixed bag of clothing that included a pink silk evening gown and matching jacket, a black and gold evening coat with fur collar and cuffs and two dark fox fur stoles sold for €240.