Sotheby’s to auction collection of paintings from the estate of Mary, Duchess of Roxburghe, who died aged 99, last year 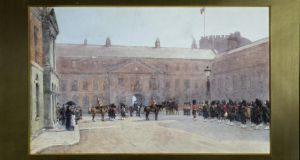 Among the highlights is ‘Guards Parade, Dublin Castle’ a watercolour by Rose Barton, estimated at £6,000- £8,000 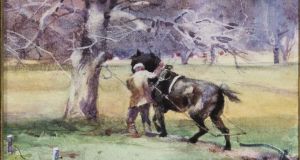 Detail from a watercolour by the Kilkenny painter Mildred Anne Butler ‘The Ploughman’ which is estimated at £1,000-£1,500 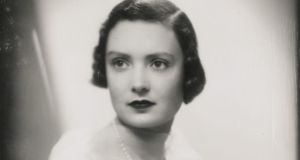 The paintings are from the estate of Mary, Duchess of Roxburghe, who died aged 99, last year 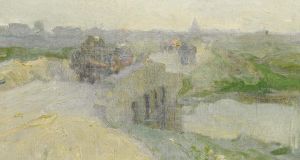 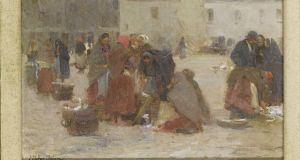 A collection of Victorian paintings by leading Irish artists has been “re-discovered” and will go under the hammer at a Sotheby’s auction in London on Wednesday.

The paintings are from the estate of Mary, Duchess of Roxburghe, who died – aged 99, last year – which she had inherited from her father, the 1st Marquess of Crewe. He had served as Lord Lieutenant of Ireland (the monarch’s representative during British rule) and had collected the paintings during his term of office (1892-1895). He brought the collection back to England and the paintings have not been seen in public since.

Sotheby’s described the paintings – by Walter Frederick Osborne, Rose Barton, Mildred Anne Butler and William Percy French – as “significant rediscoveries . . . out of public view for over a century”.

Sotheby’s said: “When the Duchess of Roxburghe passed away in 2014, her heir – much to his surprise – was her nephew Bamber Gascoigne” – the British broadcaster best known as the original quizmaster on BBC television’s University Challenge . He intends to “secure the future” of the house (West Horsley Place in Surrey) “using funds raised from Sotheby’s sale of the contents to do so”.

The Duchess was a well-known figure in pre-second World War London society. A god-daughter of King George V and Queen Mary, at the age of 19 she married the Duke of Roxburghe and, said Sotheby’s, “the fairytale wedding of 1935 at Westminster Abbey was such a significant social occasion that it was screened in cinemas nationwide”. Their wedding presents included a pair of Irish silver cream jugs from the US ambassador and Mrs Bingham – also in the auction, estimate £400-£600.

The couple divorced in 1953 when “the Duke had the butler deliver her divorce papers to her on a silver salver while they were at breakfast”.