Six notebooks with a handwritten draft of the writer’s first novel, with ‘lively doodles’, to be auctioned in London 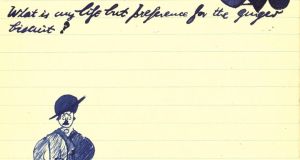 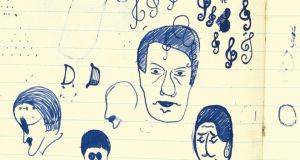 Samuel Beckett’s first novel, Murphy, described by the auction house as “one of the most important 20th-century working manuscripts remaining in private hands”, will go under the hammer on Wednesday. The estimate is £800,000-£1.2 million (€930,000-€1.4m).

The handwritten manuscript is contained in six exercise books and was written between August 1935 and June 1936, in Dublin and London, while Beckett was undergoing psychoanalysis. The novel was initially entitled Sasha Murphy.

Sotheby’s said it was “heavily revised throughout, the hundreds of cancellations and revisions providing an eloquent witness to Beckett’s struggle to give form to his artistic vision”.

The notebooks are illustrated with “lively doodles” including recognisable portraits of James Joyce, Beckett himself, and Charlie Chaplin, as well as astrological symbols and musical notations.

The novel was eventually published as Murphy in 1938. The manuscript includes at least eight cancelled versions of the book’s famous opening sentence, “The sun shone, having no alternative, on the nothing new.”

According to Peter Selley, Sotheby’s senior specialist in books and manuscripts, “This is unquestionably the most important manuscript of a complete novel by a modern British or Irish writer to appear at auction for many decades”.

He said “the notebooks contain almost infinite riches for all those, whether scholars or collectors, interested in this most profound of modern writers, who more than anyone else, perhaps, captures the essence of modern man. The manuscript is capable of redefining Beckett studies for many years to come.”

Samuel Beckett, who was born in Dublin in 1906, is one of Ireland’s best-known writers. He spent much of his life in France where he died in December, 1989. His most famous work is the play Waiting for Godot. He was awarded the Nobel Prize for Literature in 1969.