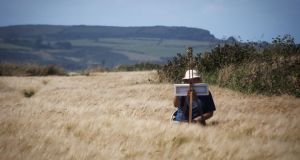 Outdoor inspiration: painter applies himself to his art 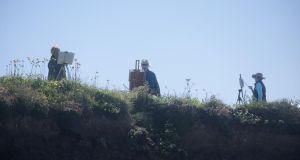 Artists capture a flavour of the landscape

Watching paint dry doesn’t sound promising as a tourism offering but it is the unexpectedly enjoyable aspect for visitors to Ireland’s outdoor painting festival under way in the southeast.

Europe’s largest plein air (outdoor) painting festival Art in the Open – International Plein Air Festival now in its eighth year concludes this weekend in Wexford and involves some 145 artists from Ireland and worldwide including Australia, Canada, Finland, Norway, Sweden, the UK and US.

The artists travel daily to a pre-arranged venue for a “paint-out”, set up their easels at random spots and simply paint what they see.

The public gets a rare chance to see painters at work and watch them interpret local landmarks and scenery. The locations vary each year and this year’s venues were all in Co Wexford. On Monday, they went to New Ross; Tuesday to Wells House and gardens, Gorey; on Wednesday to Kilmore Quay; Thursday to Hook Head; yesterday to the Irish National Heritage Park, Ferrycarrig; and today they’ll be on the streets of Wexford Town.

This week’s weather, despite a gloomy forecast, largely held up and the artists, a hardy bunch appropriately dressed for an Irish summer, seemed unconcerned.

Festival organiser Alma Hynes said, “The spirit of Art in the Open is very much to be out on the streets in the fullest sense of en plein air and, in the event of rain, the artists may make their own ad hoc arrangements to paint under cover. They sometimes use church interiors; some use awnings and doorways; and some may even resort to painting from a parked car. Oil painters can always finish the painting in a pub but you’d feel sorry for the watercolourists”.

Among the artists attending this week are Anna Hurley, an oil painter from Clontarf, Dublin; the Australian artist Leon Holmes; Antti Rautiola from Finland who likes coming here to “to paint the awesome landscapes that Ireland offers”; and, Colin Joyce, now “living in Dunfermline, Fife” but originally from Sunderland who “after 38 years in financial services retired early to follow [his] passion for painting”. He was on his first visit to Ireland having heard about the festival online.

Dee Crowe, an artist from Donaghmede, Dublin, and a festival regular, was using the heavy wooden easel she inherited from her late father, Eugene Noonan, who “received it as a retirement gift from his colleagues in the Irish Times graphics studio in the 1980s”. The best of the paintings produced during Art in the Open 2015 will go on public view – and on sale – in the Old Library in Wexford town tomorrow from 3pm and on Bank Holiday Monday, August 3rd, from 10.30am.