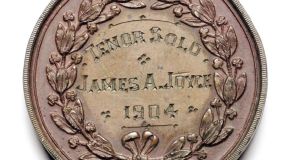 The medal made by Dublin jeweller Edmond Johnson and engraved on the reverse with the lettering “Tenor Solo James A. Joyce 1904”. 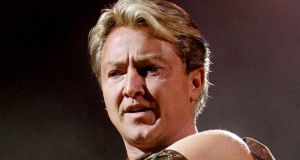 Michael Flatley acquired the medal at a Sotheby’s auction in London a decade ago, where it sold for £14,400, almost five times its pre-auction estimate. Photograph: David Sleator

Dancer Michael Flatley has confirmed that he owns the bronze medal won by James Joyce in a singing competition in Dublin in 1904.

The Irish-American, Chicago-born star of the original Riverdance and Lord of the Dance acquired the medal at a Sotheby’s auction in London a decade ago where it sold for £14,400, almost five times its pre-auction estimate.

The medal was made by Dublin jeweller Edmond Johnson and is engraved on the reverse with the lettering “Tenor Solo James A. Joyce 1904”.

Joyce was one of 22 singers who entered the singing competition at the Feis Ceoil competition on May 16th, 1904, having taken preparatory lessons from Benedetto Palmieri, professor for the voice in the Dublin Academy of Music.

However, when he was asked to sing a third piece at sight, he left the stage in disgust as he was unable to read the piece. The judge, Prof Luigi Denza of the London Academy of Music, had apparently intended to give Joyce the gold medal, but after Joyce’s refusal to sing the piece at sight, awarded him the bronze.

According to urban myth, Joyce later threw the medal into the river Liffey in a fit of pique. But the truth, according to his biographer Richard Ellman, is that since “he could not pawn it” he brought it home and “disgustedly tossed it on his aunt Ms Murray’s lap, saying, ‘you can have it, Aunt Josephine. I have no use for it.’”

The medal was part of a collection of mementoes owned by his brother Stanislaus which turned up at Sotheby’s in 2004 – the centenary year of Bloomsday.

Mr Flatley, who has homes in London and Cork, is a collector of art and antiques and also owns a first edition copy of Joyce’s Ulysses.