A real ‘Blueshirt’ to be auctioned at Whyte’s 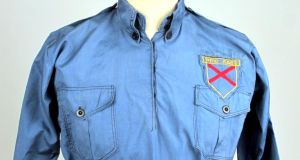 It’s one of the best-known uniforms in Irish political history but the real thing is very rare. An actual shirt and belt of the Army Comrades’ Association – better known as the “Blueshirts” – is among the lots in Whyte’s auction of historical memorabilia and collectibles in Dublin next Saturday, October 17th.

The “blue cotton military-style shirt with epaulettes and breast pockets and embroidered shield-shaped Fine Gael badge stitched to the left breast; together with a blue cotton uniform belt” is estimated at €1,000-€1,500.

The Army Comrades’ Association (ACA), later named National Guard, was a short-lived quasi-military organisation established in 1932 to provide physical security for Cumann na nGaedheal during the party’s handover of power to Fianna Fáil.

The following year, Éamon de Valera sacked the Free State’s police commissioner General Eoin O’Duffy who took over leadership of the Blueshirts. Within a few months, de Valera declared it an illegal organisation and the ACA merged into the newly-formed Fine Gael Party.

Some former “Blueshirts” went to Spain to fight for Franco’s side in the Spanish Civil War but the organisation faded away. The term “Blueshirt” is still occasionally used to describe a member of Fine Gael – sometimes derogatorily, sometimes good-humouredly – by the party’s political opponents. The auction also features a “Blueshirts” flag, estimated at €1,000-€1,500, that Whyte’s said was “extremely rare – the first we have found recorded at auction”.

From the opposite side of the political divide is the “Returning Officer’s Report for East Clare Election” in 1918 signed by the winning candidate de Valera (estimated at €8,000-€12,000).

Whyte’s described it as “an extremely important document marking the start of de Valera’s 42-year career as an elected representative”.

The by-election in East Clare was caused by the death of William Redmond, the sitting MP, in the first World War. Patrick Lynch, the candidate of the Irish Party was expected to win but “the wave of support for Sinn Féin following the 1916 Rising saw de Valera elected by a large majority”.

There’s a huge selection of lots to interest both historians and collectors – both professional and amateur.

One of the most intriguing is lot 283: a “Letter from Colonel Fritz Brase, head of the Irish Army School of Music and Nazi Party organiser in Ireland to Chief Justice Kennedy.

“The letter congratulates Hugh Kennedy on his appointment and mentions Brase’s conducting the Army band at his inauguration. Brase was a distinguished Prussian Army musician who was appointed by General Richard Mulcahy to establish the Irish Army School of Music.

“He was an active member of the Nazi Party and recruited for the party during his long stay in Ireland, where he died in 1941” (estimated at €80-€100).