Henry painting described as one of his finest late works 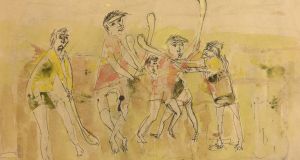 A painting by Paul Henry that has been in a private collection in the US is the top lot in Morgan O’Driscoll’s art auction in the RDS on Monday evening. Lot 84, A Kerry Lake, estimated at €60,000-€80,000, was previously in the collection of the late Dr Marguerite Sykes Nichols, a New York oncologist who died, aged 99, in 2012. Auctioneer Morgan O’Driscoll said “at the time of purchase [of the painting] in the 1960s, she and her husband, industrialist Charles Nichols, had a house in Ireland”. In a catalogue note, Dr S. B Kennedy describes A Kerry Lake, dating from around 1935, as “one of Henry’s finest late paintings”.

Lot 34 is a watercolour dated 1947 entitled The Hurlers by Louis le Brocquy. According to Dr Róisín Kennedy’s catalogue note, “this very rare painting of a sporting event by Louis le Brocquy depicts a group of boys playing hurling” and was made the year after the artist moved to London in late 1946. She writes: “the fluid depiction of the entangled limbs and the highly expressive faces of the players convey the complexity and skill of the game of hurling as well as their individual determination. Their bare feet suggest that the match is being played in a remote West of Ireland landscape, possibly on a strand, the only place where boots would not have been worn. Le Brocquy stayed in Achill and visited Mayo extensively during the war years, where he may have seen such games.” He clearly picked the wrong county. His painting is more like a Cubist choreographer’s sketch for the Ballets Russes than a credible depiction of the national game. The estimate, €15,000- €25,000, seems remarkably steep given the plunge in prices for le Brocquy’s work since 2008.

Morgan O’Driscoll seems to have carved out a niche as auctioneer “by appointment” to Michael Flatley, whose Colorado Springs, Lot 90, is estimated at €30,000-50,000.

The online catalogue has a useful feature: a photograph of each painting on a wall above a chair to give prospective bidders a sense of its size and appearance in a room.

Older people on isolation: ‘I have plenty of food but not much appetite’
2

Gardening for beginners: How to sow and grow for the first time
7

Coronavirus: ‘you may have heard of a game called Plague Inc’
8

Homeless in the Covid-19 era: ‘We all feel a bit queer, clammy, fluey’
Real news has value SUBSCRIBE