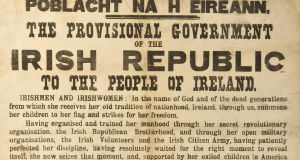 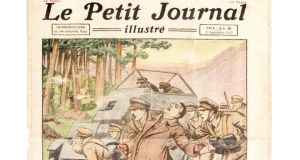 A copy of the French newspaper Le Petit Journal’s weekly illustrated supplement, showing an artist’s impression of the death of Michael Collins, fetched €100 at Adam’s

As the centenary commemorations for the Easter Rising draw closer there had been speculation that the prices for items of memorabilia would begin to rise sharply.

Adam’s said the “private client” had decided to sell the document after owning it for seven years and was “realistic in his approach to pricing and happy to offer it for sale at the same estimate that we had guided it at in 2007, €100,000 to €150,000”.

It is estimated that 1,000 copies of the Proclamation were printed in Dublin. Most copies of the flimsy paper poster were either destroyed during the fighting and destruction in Dublin – or were subsequently lost.

It is believed that about 50 copies have survived. Half are in public ownership – in museums and libraries including four copies owned by the Irish State: in the National Museum, the National Library of Ireland, Leinster House and Kilmainham Gaol – and the other 25 copies still in private ownership.

That spectacular price prompted other private owners to sell. Four years later, in 2008, Adam’s sold another copy, “signed by Sean McGarry, who was Tom Clarke’s bodyguard and fought in the GPO” for €360,000.

But the price for an unsigned copy – depending on condition - now seems to about €100,000.

A handwritten countermand order, signed by Eoin MacNeill in a botched attempt to cancel the Easter Rising just reached its lower estimate and sold for €30,000 (€30,000-€50,000).

A copy of the French newspaper Le Petit Journal ’s weekly illustrated supplement published in Paris on September 3rd, 1922, with a front page showing a dramatic artist’s impression of the death of Michael Collins in west Cork with the headline “Les convulsions sanglantes de l’Irlande’” (Bloody convulsions in Ireland) sold for €100 (€150-€250).