Who will be to blame when the first unvaccinated baby dies from meningitis B?

Muiris Houston: The good news is that a vaccine against meningitis B is due to be introduced to the free childhood vaccination programme from December 1st 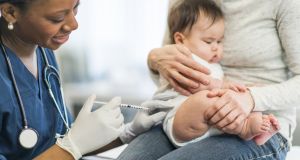 With less than two weeks to go before the first babies are to be injected with Men B vaccine here, there is no agreement on how that is to happen

One of the success stories of public health medicine and general practice in recent times has been the reduction in bacterial meningitis rates in Ireland. Figures from the Health Protection Surveillance Centre (HPSC) show a significant drop in the number of invasive meningitis cases due to the C strain of the N. Meningitidis bacterium following the introduction of the Men C vaccine to our national immunisation programme in 2000. However, the Republic still has the highest rate of invasive meningococcal disease in Europe. (Invasive disease means the bug invades the blood stream and/or the membrane lining the brain.)

In this part of the world the majority of meningitis infections occur in winter and early spring. Meningococcal disease may occur at any age, but sporadic infection is most common in infancy and early childhood.

Approximately 10 per cent of the population carry the meningitis microbe in their noses without ever developing symptoms. Transmission occurs from person-to-person via respiratory secretions. A small minority of individuals who pick up N. meningitidis develop invasive infection after an incubation period which is typically one to 10 days, although this usually occurs in less than four days.

Meningitis B has supplanted the C strain as the main invasive meningococcal type; HPSC figures for the second quarter of this year show the B strain is now responsible for 50 per cent of all documented invasive meningococcal disease. However, the good news is that a vaccine against meningitis B is due to be introduced to the free childhood vaccination programme from December 1st.

The Department of Health and the HSE plan to add two new vaccines – Men B and Rotavirus – to be given by GPs to all children born after October 1st, 2016. Rotavirus disease is the most common cause of gastroenteritis in children and results in 1,000 hospital admissions each year.

Men B vaccine is an injectable vaccine given when a baby is two months old; further shots are given at four and 12 months. Because Men B and Men C vaccines cannot be given simultaneously, the current schedule for Men C will be changed and it will now be administered when babies are six months and 13 months of age.

We have already been slow off the mark in formally introducing Men B to the childhood vaccine schedule. Bexsero, the commercial name for Men B, was first approved for use in the EU some four years ago this month, but until now, in one of Ireland’s many examples of health inequality, parents here had to pay up to €700 for the full schedule of injections. Children in the UK have been getting it free since September 2015.

But with less than two weeks to go before the first babies are to be injected with Men B vaccine here, there is no agreement on how that is to happen. According to Dr Austin Byrne of the GP Committee of the Irish Medical Organisation (IMO), “Following early discussions with the IMO, the department and the HSE have simply disengaged in the past number of weeks, leaving GPs, and more importantly parents of new-borns, at a loss as to what is happening.”

As there is additional work and responsibility involved in expanding the childhood immunisation schedule, it is reasonable for GPs to expect a modest additional fee for administering Men B and Rotavirus vaccines. What is not acceptable is foot-dragging and an unwillingness to face up to their public health responsibilities by mandarins in the HSE and Department of Health.

They were the ones who set the deadline for introduction. According to the HSE website, “The HSE has been given funding to allow us to introduce these vaccines for all babies born on or after 1st October 2016.” So if the money is there, why the obfuscation? And who, when the first unvaccinated baby dies early next year from invasive meningitis B, will accept responsibility?