What’s the secret to having true grit?

Grit Doctor Ruth Field scored an ungritty 2.6 out of a possible total score of 5 in the test. But why? 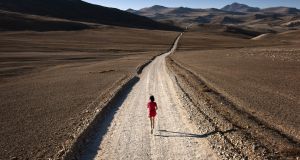 For me, the only grit I have is created continuously through the practise of regular running. Photograph: iStockphoto

Last week, an old friend sent me a “grit” questionnaire. I nearly fainted with joy at the prospect of having my levels of grit measured.

The creator of this questionnaire is feted American psychologist Angela Duckworth, the bone fide doctor of grit. She has done the studies and research to prove what myself (and many others) have instinctively known to be true: that grit, which she characterises as perseverance and passion for long-term goals, is more determinative of success than talent.

Fascinated by how someone becomes a grit fiend of such epic proportions, it didn’t take me long to spot where Duckworth’s grit was cultivated. Rather than being showered with praise as a kid, her father was always telling her, “You’re no genius.”

This daily dose of gritty medicine became the pearl of her “grit theory” because she set about upending her father’s assumption about her lack of genius – and won. Not only did she show that grit is the key to success – not genius – but she latterly won the MacArthur Fellowship, commonly known as the “genius grant”. Duckworth, it turns out, is a gritty genius. Jealous? Moi?

She operates a household that runs on grit. Each family member has to choose a “hard thing”, like learning a musical instrument, something that requires dedication and practise. Quitting isn’t an option unless there is a natural breaking point and an alternative “hard thing” is chosen in its place.

I love this idea, but so far with five-year-old twin sons, the “hard thing” is getting them to sit down for a meal. Or getting them out of the house. Or getting their shoes on. These tasks often require dedication, commitment and practise that seem Herculean every time. And that’s just me and Olly.

As well as this, I tend to overpraise our children for the tiniest achievement. I am genuinely amazed by the mere fact that they come out of school each day alive. Maybe my bench mark is too low. Perhaps I’m not a gritty parent. Which leads me neatly on to my confession . . . on the Duckworth questionnaire, I scored a pathetically ungritty 2.6 out of a possible total score of five.

I posted up my result on the Run Fat B!tch Run Facebook page with a link to the test and promptly received reports of scores of four and above, which made me panic about my woeful grit levels.

Until I decided on a change of tack. I know I’ve got grit, so what if it’s the test that is all wrong?

Yes, yes of course, it must be the test that is somehow failing to identify my inner grittiness. Anyone else reading who got a similarly low score will know exactly what I’m talking about.

Self-reporting tests throw up obvious problems, not least because it is almost impossible to be objective (or even honest) when judging ourselves, particularly when we are being asked to judge our own “qualities”. When I mentioned my “easy going” temperament to a great friend over half term, she nearly choked on her G&T. “Ruth, darling, you have many lovely qualities, but easy going isn’t one of them.”

Even more spurious is self-reporting qualities that are geared towards grittiness. Questions such as, are you diligent (q 12), and are you a hard worker (q 6) play to a grit fiend’s Achilles’ heel. You already know that these qualities (hard work; diligence) are the building blocks of grit and that answering “yes” to both questions in the strongest possible terms will score you highest.

But implicit in being gritty is the idea that there is always more work to be done, that we could do better. Behind perseverance must lie the belief that whatever we are are currently doing isn’t enough, hence the need to persevere in the first place.

Gritty types by definition are much harder on themselves, and never think that they are working sufficiently hard or diligently. If they did, why keep chipping away at it? If you think you are playing that Beethoven Sonata perfectly already, there is no need to practise it for hours on end.

Maybe there is also such a thing as too much grit. Undercover economist Tim Harford certainly thinks perseverance is not always the answer. He uses the example of John Maynard Keynes who, along with his contemporary Irving Fisher, failed to predict the Wall Street Crash of 1929. The two great economists reacted differently. Fisher stuck to his guns; Keynes shrugged and changed direction. Fisher was ruined; Keynes died a millionaire. So perhaps being gritty is also about being adaptable.

Maybe it’s about knowing when to admit defeat or to change tack. Maybe it’s about using our intuition and grit to overcome obstacles and find a way forward, even when it means changing direction completely, or having to admit we were wrong. Persevering for perseverance’s sake may be every bit as foolhardy as giving things up just because they are “too hard”.

And here’s another thing. While schools and scales are developing ways to instil grit into our children, I’ve always believed you can make yourself gritty by running. For me, the only grit I have is created continuously through the practise of regular running.

After I run, it somehow makes me want to persevere, makes perseverance itself easier and gives me passion for both short- and long-term goals. Passion for life. So that’s what my low score is telling me to do: Run fat bitch run.