What happens your body when you fly?

If you’re flying off this summer, take a moment to find out what it does to your body and how you can minimise the effects 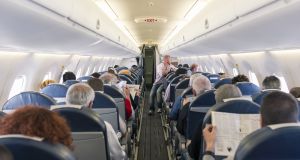 Research from a travel insurance company (Compare travel) claims you are 100 times more likely to catch a cold during a flight. Photograph: iStockphoto

We know flying tinkers with our bodies. I can feel it right now as I type this en route to Barcelona. Because usually I do well on little sleep. I don’t nap. And yet, right now, I would love to close my eyes and just rest them . . . for a moment. And this is not just because I am trying to work and it’s certainly not the small seats (at 5’2” I can’t complain), it’s scientific.

Seeing as we are in the air only 10 minutes, I am not sure if I can use this excuse but lower oxygen levels contribute to feelings of fatigue. Plane cabins are pressurised to simulate a 6,000-8,000-foot elevation on earth. At those altitudes, your blood absorbs less oxygen and, as any climber or skier can attest, this can cause dizziness, tiredness and a lack of mental sharpness. Add to this the fact that blood doesn’t circulate much when you are seated for hours and this stagnation also reduces oxygen levels.

Speaking of stagnation, last year I found out I have Factor V Leiden, a genetic blood-clotting disorder. There are a few things I need to be aware of and one of them, according to my doctor, is flying. I should be wearing compression socks. Why? Well, blood collects in your legs and feet when you are sitting for any length of time. When it leaves your veins for surrounding tissue, the mid-flight swelling follows and, in extreme cases, this can escalate to blood clots. To counter this, you need to push the blood back from your extremities to your heart. Our tip? Flex your feet, roll your ankles, stretch your legs and contract your calf muscles. Getting the blood moving should help counter fatigue as well and take your mind off the fact that you are swelling up like a beach ball.

Dry skin and no taste

The dry air also wrecks havoc with our skin. Dry, re-circulated air, as well as cabin pressure, zap moisture from your skin. Number one rule? Drink water to rehydrate. Your body is said to be deprived of up to 1.5 litres of water on a three-hour flight and humidity levels as low as 4 per cent. After that, there are countless balms, serums and creams to counteract this and to bring your skin back to life post-flight. The dryness in the air also means that one-third of your tastebuds are numbed, which is the reason that airlines tend to opt for heavily flavoured food.

If it isn’t a noisy neighbour, your ears might hurt for other reasons on a plane. As many a parent with a screaming child can testify, things happen as the plane descends. Air within the ear cavity contracts, forming a slight vacuum. If the air cannot escape, because the Eustachian tubes are blocked because of a cold for example, the eardrum becomes painful. In worst cases, the drum will rupture. Yawning, clicking your jaw or swallowing while your tongue is against the roof of your mouth will all help.

It’s not just in your ears that gas gets trapped. As the plane rises, the gas in your intestine expands. Your stomach might feel cramped or full . . . in a similar way to that bottle of fizzy liquid that you bring on board and open once at cruising altitude, only to fizz all over you. The expert advice? Just let it out. It could cause pain otherwise.

Trapped gas can also cause problems in your mouth – gas fluctuations can get stuck in teeth cavities – and in your sinuses.

My neighbour has just opened his fold-down table. He casually brushes off the remnants of the last passenger (or was it the passenger before that?) with his hand. Later he opens the nibbles that he bought from the food cart. He eats them with the same hand. I’m not overly germ conscious – I was brought up with animals. I was minding my seven-month old niece last weekend and wasn’t too concerned as the golden retriever (Lola) licked her face. I’m pretty sure it will strengthen Eva Belle’s immune system. But on a plane, I am a little more edgy, even as I pull out my lavender hand sanitiser. But do I need to be worried?

Well, a 2014 study carried out by Auburn University in Alabama found that disease-causing bacteria can survive for up to a week in plane cabins. They survive on surfaces such as tray tables, seat pockets, window shades and armrests. Escherichia coli (E. coli) was found to survive 96 hours. Staphylococcus aureus (MRSA), a bacteria that can cause infections, skin disease, pneumonia and sepsis, survived 168 hours.

Water stored on board has also been found to contain traces of E. coli and other harmful bacteria. Back in 2010, CNN highlighted six “germ zones” that have stuck with me. Perhaps the most surprising was the water on board. It cited a 2004 study that saw water samples taken on board 327 domestic and international aircraft. One in 10 tested positive for coliform, an indicator that other potentially harmful bacteria may be in the water.

Most airlines no longer serve glasses of water, but coffee and tea are brewed using this water. The boiling doesn’t typically reach hot enough temperatures to kill E. coli, according to the study. However, the Environmental Protection Agency in the US now requires all airlines to test for coliform and E. coli on every airplane at least once year.

Moving into the main “germ zone” – the toilets – it’s no surprise that they were highlighted as an area of concern. At the time of the study, the news channel called them a “smorgasbords of threat”. During the SARS virus outbreak, toilets were identified as one of the crucial “hot zones” for spreading the disease, according to the US Centre for Disease Control (CDC). The “thunderous volcanic” flushing action of the toilet exacerbates the health risk by launching germs from the toilet.

While on the subject of contamination, if a neighbour starts to cough and splutter I am pretty sure I move noticeably in the opposite direction. I’m a bad patient (see Padraig O’Morain’s column on page 15) and I just don’t want to “catch” a cold on a plane. But is it even possible? Apparently so.

Research from a travel insurance company (Compare travel) claims you are 100 times more likely to catch that cold during a flight. What we know for sure is that the almost moisture-free air increases your vulnerability to airborne infection. Certain viruses thrive in low humidity, and respiratory viruses and cold-like viruses are among these. On board you also have a long “exposure time” to exhaled infected droplets.

However, airlines tout their cleanliness. According to some aviation authorities, the total volume of air on a plane is refreshed every two to three minutes, which is more frequent than in most air-conditioned buildings, where the air is changed every five to 10 minutes.

I think it’s time to rest my eyes and dream of face masks.

Samantha Power: I called Hillary Clinton a monster, but I didn’t mean it
5

Róisín Ingle: Deck the feckin’ halls. That is an order
8

Chinese in Ireland: Raising children away from ‘tiger parenting’
9