Wanting the credit for staying at home 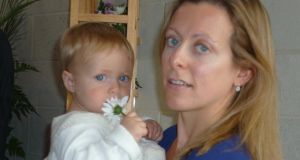 It has been a swift rise to prominence for the Irish stay-at-home mother Laura Perrins who has unwittingly become an unofficial spokeswoman for millions like her in the UK.

The Dublin-born barrister who practised criminal law in London has become a ferocious and effective advocate for those who are all too often taken for granted in public discourse.

Now living in London, Perrins (32), who is from Balbriggan, Co Dublin, originally intended to take six months off after having her first child, Annabel, three and a half years ago.

Six months turned into nine and nine into 12 months. Being self-employed, there was no employer to answer to. Another year later her second child, Matthew, arrived. “Ironically, I had planned on going back six months after Annabel was born. I laugh when I look back on it,” she recalls.

In March she successfully ambushed the deputy prime minister Nick Clegg during a phone-in on LBC, a local radio station in London.

Clegg came on to field questions from the public about one of the British government’s flagship projects to help the so-called squeezed middle with a £1,200 (€1,392) tax credit for childcare.

The money is meant to offset the onerous costs of childcare in the UK for double-income families, thereby encouraging women to return to the workplace.

From the offset, Perrins tore into him: “Hi. I’m just wondering why the coalition is discriminating against mothers like me who care for their children at home with the latest announcement.”

Stay-at-home mothers
Clegg tried to lighten the mood when he heard Perrin’s son crying. “Laura, I can hear one of your children in the background by the way,” he said.

She snapped back: “Yes, you probably think what I do is a worthless job.”

It was clear from his stuttering responses that Clegg really hadn’t thought about the consequences for stay-at-home mothers.

Still Perrins pressed on using her forensic skills as a barrister to confound him. “The law is good training for anything. It makes you a bit more confident in your arguments,” she says.

Perrins studied law at UCD and then went to Cambridge to study for the LLM in 2004.

Her rage was built on a simmering resentment about the UK coalition’s attitude to stay-at-home mothers and single-income households.

If the (UK) coalition government really values stay-at-home mothers, she argues, why are they so intent on using the tax code against them?

Unlike Ireland, the UK does not recognise marriage in the tax code, creating some obvious anomalies.

Tax-free allowance
In Ireland a non-earning spouse can transfer his or her tax-free allowance to their working spouse; in the UK single-income earners who are married earn the same as single people who are unmarried.

While the Irish Government has retained child benefit as a universal one, the UK government abolished it for anybody earning more than £60,000 a year. This created another glaring anomaly.

If you are a single-income family, you will get no child benefit if the breadwinner earns more than £60,000 a year. However, a double-income family, where both partners earn up to £49,000 each, a total of £98,000, can keep theirs.

The £1,200 tax credit for childcare is available for couples earning up to £300,000 a year. Yet, single-income families in the UK get nothing.

“That would make you pick up the phone and call someone,” she says, “there is no justification for it whatsoever.”

She also objects to the cliché trotted out by the UK government about it being for “hard-working families”.

“The inference is that if you stay at home and look after your children, you aren’t hard working.”

Easy target
The whole scenario smacks of a government that has not thought things through, but Perrins sees it otherwise.

“Stay-at-home mothers are an easy target if you want to raise GDP. If a woman goes out to work, that GDP counts and so does her childcare. If I look after a neighbour’s child it counts; if I look after my own, it doesn’t.”

The British prime minister David Cameron made the recognition of marriage in the tax code a central kernel of his policy aims in government, but nothing has come of it to date.

Perrins has become the public face of Mothers at Home Matter, an organisation set up to lobby for stay-at-home mothers in the UK. She was recently on BBC 2’s Newsnight programme tackling the British children’s minister, Liz Truss, about plans to introduce a French-style creche system into Britain.

She says being separated from her Irish family made it easier for her to decide on staying at home. “I wouldn’t have it any other way. I just wanted to care for my children myself. That is my decision. If other mums have other decisions, that is genuinely a matter for them. We would just say that all families should be treated equally. They shouldn’t be penalised for staying at home. That’s what happens in the UK.”

Her campaign to overhaul the taxation system in the UK has won the high-profile backing of Tory MP Tim Loughton, the former children’s minister.

He has praised the logic of her arguments and tabled an amendment to the UK government’s finance bill for a transferable tax allowance, similar to the Irish model, for married couples and those in civil partnerships for children under the age of five.

The measure could have a lot of support from Tory MPs who believe David Cameron’s enthusiasm for gay marriage is not matched by the same sense of resolve for conventional marriage. Watch this space.

Return to the wild: How to go wild camping in Ireland
6