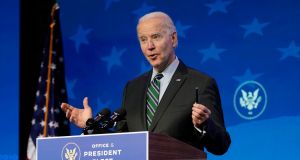 It’s okay to stammer is the central message of a new international movement of people who want us all to accept and embrace stammering, not as a speech defect but as a different way of talking.

The experience of stammering varies from person to person but the outward appearance is someone who finds it difficult to say certain words or syllables which results in repetition, prolongation or blocking of speech. About one in 20 young children will stammer, while about one in 100 adults stammer openly or hide their stammer.

“Stammering is a neurodevelopment disorder and has nothing to do with being stupid or more intelligent or more nervous. It’s not something that people can control so it’s important that people aren’t blamed for it,” says Dr Mary O’Dwyer, speech and language therapy manager at Cork/Kerry Community Healthcare.

O’Dwyer says that people need to understand the pitfalls of adopting an approach to stammering that focuses only on fluency. These pitfalls include a negative impact on confidence, negative judgment of who you are and a sense of failure if fluency isn’t achieved. She acknowledges that it’s difficult for some parents to adopt an approach based on “it’s okay to stammer”. But she says that most parents opt for it because they prioritise the child’s confidence and want the child to know that they are loved just as they are.

The key for those who don’t stammer is to concentrate on what the person is saying, not the way they are saying it. There should be no shame attached to stammering.

“What we need is openness about stammering, patience, a little bit of time and no pressure to get [what is being said] out now,” says Dr O’Dwyer.

Mark Noonan, an adult who stammers, says that as a child he had speech therapy which didn’t help much. “But later in life, I did other things to get comfortable about stammering. I did acting and stand-up comedy classes and gigs which got me out of my comfort zone.” Now, he says, “I feel really good about it. I don’t see it as a burden.”

Taro Alexander, founder of the Stuttering Association for the Young in New York, says, “We are all human beings who want to be heard, and that means letting everyone have as much time as they need to speak.” Alexander recently endorsed the documentary film My Beautiful Stutter, which follows five children who, after experiencing bullying and stigmatisation, meet other children who stutter at an arts camp.

Dr Jonathon Linklater is a speech and language therapist, a stammerer and the development manager of the Irish Stammering Association, which offers advice and guidance to employers when interviewing people with a stammer. “Many job advertisements state that the person must have good communication skills but what does that mean? Many people who stammer might think they don’t have good communication skills yet they are good at listening, good at understanding and appraising situations and reading people.”

One new book that has given impetus to the “it’s okay to stammer” movement is Stammering Pride and Prejudice: Difference not Defect edited by Chris Constantino, Patrick Campbell and Sam Simpson.

Constantino, who is assistant professor at the college of communication and information at Florida State University has at time described his stutter as an art form while Patrick Campbell, who is a children’s doctor in the UK, talks about the growing movement of “dysfluency pride” or stammering activism. Drawing on disability rights agenda, the strong voices in this movement are found in podcasts such as Stutter Talk and the blog Did I Stutter?

There have always been public figures who stammer but many fought to hide or overcome their stammer. US president Joe Biden has spoken about how he overcame his stutter and didn’t let it define him. Some stammering campaigners are now calling on him to be more open about the fact that he still stammers.

The Irish Times columnist Fintan O’Toole haswritten about his experience of stammering and how he pushed himself into live radio and televisions broadcasts to deal with it. “Other people’s embarrassment is the worst part of having a stammer – but it forces you to expand your vocabulary and gives you an unusually strong appreciation of the written word,” he wrote.

Novelist David Mitchell has also spoken publicly about how his stammer influenced him into becoming a writer. “If there are words you are going to block on, you are constantly evaluating alternative ways to say the same thing and a word that will get you out of a fix. On a psychological level, your interior use of language is much richer than your exterior use of language,” Mitchell said in a recent interview with presenter John Kelly on RTÉ’s The Works.

Mitchell, one of the patrons of the British stammering association Stamma, promotes that organisation’s Find the Right Words campaign on moving away from negative language around stammering. The campaign launched editorial guidelines and worked with organisations such as Wikipedia encouraging everyone to simply accept how people who stammer talk rather than suggesting they need to fix it.

Jane Powell, chief executive of Stamma, says: “The media campaign aims to help people who don’t stammer to understand that stammering is how some people talk and that suggestions about breathing and nerves and assumptions that you have to be fluent to be accepted have no place in today’s society.”

The organisation also encourages people to stammer in public as a means to breaking down wider stigma of stammering in society.

– Don’t tell the person to slow down, take a breath or relax.
– Don’t interrupt on speak over them.
– Don’t try and guess or finish their words as this can be disempowering and unhelpful.
– Do maintain natural eye contact, listen and wait until the person has finished speaking.
– Do focus on what they are saying, not how they say it.
– Do be aware that stammering varies. Some people who stammer have most difficulty when starting to speak and less difficulty once under way.
– Do be aware that phone calls can be particularly difficult so give the caller plenty of time to speak.
– Don’t be afraid to ask them how you can make it easier for them.
(Adapted from information on stamma.org)