None of the parties has solutions to ever-growing waiting lists 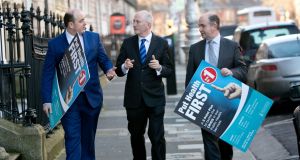 Dr Paddy Hillery, IMO NCHD committee, Dr Ray Walley, president of the IMO, and Dr Peadar Gilligan, consultant chairman, prior to a briefing on the health services in the context of the general election. Photograph: Chris Bellew/Fennell Photography

What are the health plans of the political parties? In 2011 promoting health and wellbeing was not a priority. Now all parties have included health promotion and prevention in their manifestos. Has Healthy Ireland: A Framework for Improved Health and Wellbeing 2013-2025 finally penetrated the brains of politicians? If so, it is good news for population health.

However, overall understanding of the determinants of health and what constitutes effective health-promotion practice differs from party to party, with some showing little understanding of what creates health and others having well- thought-out plans.

Renua Ireland “believes that communities and citizens must take responsibility for their individual and collective health” and “can educate themselves as to how they can maintain balanced diets and engage in active lifestyles”. The party proposes an Active Town programme designed by dietitians and experts in physical education. Good luck with that!

Fine Gael, Labour, Fianna Fáil and Sinn Féin propose taxing sugary drinks and restricting advertising and marketing of energy-dense, nutrient-poor foods. It is about time politicians had the guts to take on the food industry. The Green Party has the best health-promotion policy. It recognises that good health depends on “a clean and sustainable environment” and wants health included in all public policies, including environment, poverty, employment, housing, education, gender equality and planning, “that allow people to maximise their health”.

This is a well-established World Health Organisation principle, that of “making the healthier choice the easier choice”.

Older people are mentioned in all the manifestos, with an emphasis on homecare options, including more home help hours and homecare packages. The Social Democrats will reform the Fair Deal scheme “to provide a legal entitlement to a homecare package”. Renua wants family members to be paid to look after their “elderly” relatives. Mental health is also tackled in most of the manifestos, with an emphasis on greater availability of counselling in primary care, fewer drugs and more evidence-based practice.

In 2011 most parties half-heartedly supported the concept of primary care. Now all parties plan a complete reorientation of services away from acute hospitals towards primary care and community services. The Labour policy is the best in terms of this badly needed reorientation and promises a new “national community health service” that will be “a fully functioning system of primary care, free at the point of access”. Fianna Fáil will hold onto the medical card scheme, which will continue to be means-tested.

This time around, health insurance is not mentioned by any party other than Renua, which proposes a system “where patients insure themselves against adverse outcomes”. Most parties – except for Fine Gael and Renua – which want hospitals to compete with each other for business – promise a universal healthcare system funded from general taxation. Fine Gael will decide how to fund its universal healthcare system when it gets into government. Labour and Social Democrats propose versions of an Irish NHS.

None of the parties has solutions to the endless stream of people queueing to get their names on waiting lists. In 2011 there were 47,458 people on the acute hospital inpatient waiting list. In January 2016 there were almost 70,000 waiting. A further 383,713 are waiting for an outpatient appointment. What is going on? Are people sicker than they used to be?

Politicians also need to believe in primary care and start promoting the services more enthusiastically instead of treating access to an acute hospital bed as the gold standard. Only then will things really change.

Dr Jacky Jones is a former HSE regional manager of health promotion and a member of the Healthy Ireland Council.