Second Opinion: Are we cherishing all the children of the nation? 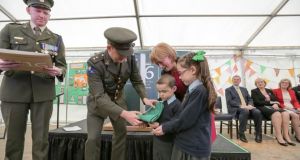 Lieut Seamus Shannon presents Conor McDonagh (4) and his sister Kyla (7) with a national flag and a copy of the 1916 proclamation at a ceremony in St Patrick’s National School, Cornanool, Castlebar, Co Mayo. Photograph: Keith Heneghan / Phocus

Flags are important. They have meaning for people. National flags are particularly important. The Flags for Schools initiative is part of the 1916-2016 Centenary Programme, which aims to promote “a new and more expansive sense of Irish identity”.

Every primary school in the country will be visited by members of the Defence Forces and will receive a national flag and the 1916 Proclamation.

On Proclamation Day, March 15th, 2016, each school will raise the flag in a special ceremony and read the part of the Proclamation that contains the words “The Republic guarantees . . . equal rights and equal responsibilities to all its citizens and declares its resolve to pursue the happiness and prosperity of the whole nation and of all its parts, cherishing all the children of the nation equally.”

What happened to these lofty ideals? If you took the word “children” to mean only children, and not people of all faiths born on the island of Ireland, you would say neither the government of the Irish Free State, nor any subsequent government, kept the promise to cherish “all the children of the nation equally”. Children’s rights were trampled on from the beginning. From 1922 to 1987, births had to be registered as legitimate or illegitimate. It took 65 years to change the law.

In 1952, 30 years after the foundation of the State, more than one in four illegitimate babies died. Central Statistics Office reports repeatedly noted that “these rates must be regarded as excessive”.

Dr James Deeny, chief medical officer from 1944 to 1962, said “all this fuss about babies [dying] was not received with any great public interest or sympathy”.

The 1937 Irish Constitution and the ratification of the Universal Declaration of Human Rights in 1955 made very little difference to children’s lives. For almost 70 years after 1922, mother and baby homes, Magdalene laundries, orphanages and institutions thrived, with horrific health consequences for thousands of babies and their mothers. Physical and sexual abuse was rife in homes, schools and institutions.

The latest report from the National Board for Safeguarding Children in the Catholic Church shows that between 1941 and 2003, 325 allegations of abuse against 141 priests or other religious people, resulted in only eight convictions. Poor and Traveller children were particularly badly treated, resulting in ill-health that lasted a lifetime.

Children are safer than 10 years ago. Better Outcomes Brighter Futures: the National Policy Framework for Children and Young People – if fully implemented – will improve health outcomes in a range of areas including obesity, mental health, inequality and child poverty.

The Office of the Ombudsman for Children has produced Small Places: Exploring Children’s Rights in Children’s Daily Lives and Exploring Young People’s Rights in their Daily Lives, for primary and post-primary schools. These resources put children’s rights into the context of the 1937 Irish Constitution and the UN Convention on the Rights of the Child, and are named after a 1958 Eleanor Roosevelt speech when she asked “Where, after all, do universal human rights begin? In small places, close to home . . . Unless these rights have meaning there, they have little meaning anywhere.”

Some children’s lives have not improved. The Children’s Rights Alliance Report Card 2015 awarded the Government an overall C grade (satisfactory attempt, but children still left wanting). They awarded an F (fail) for child poverty and D pluses (barely acceptable performance) for the right to health, equality and nondiscrimination.

By all means deliver the national flag and 1916 Proclamation to primary schools. Identity and a sense of belonging are important determinants of health. But let’s not kid ourselves that we are a great little country for equality and human rights.

History tells a different story. The visits to schools by Defence Force staff must have a context, and children need an opportunity to reflect on the Proclamation. As part of the Flags for Schools project, children will write a new Proclamation. Here’s hoping this will be preceded by an honest appraisal of how the original operates.

The flag and the Proclamation must have the same meaning for every child, not just the privileged few.

Dr Jacky Jones is a former HSE regional manager of health promotion and a member of the Healthy Ireland Council.