Rose of Tralee and doctor-to-be Elysha Brennan in Tanzania

This year’s Rose of Tralee is also a medical student. She visited Irish-supported surgery initiatives in Africa 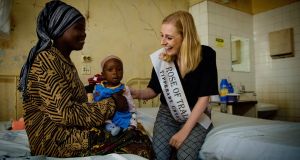 Elysha Brennan, Rose of Tralee and RCSI medical student, meets a mother and her baby during her whistle-stop tour of Irish-supported medical work in Tanzania. 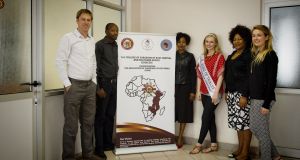 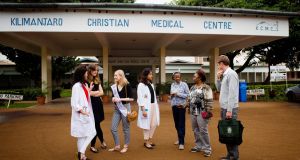 Elysha Brennan meets students and staff at the medical centre in Tanzania.

For every 100,000 people in Ireland there are 267 physicians. In Tanzania, in eastern Africa, this number is three per 100,000. My jaw dropped when reading these figures in preparation for my trip to the country to see the work being undertaken by the College of Surgeons of East, Central and Southern Africa (Cosecsa). I am about to start my third year as a medical student at the Royal College of Surgeons in Ireland (RCSI) after a year’s hiatus as Rose of Tralee.

RCSI has worked in partnership with Cosecsa for almost 10 years to increase the provision of quality, essential surgical and emergency care across 10 countries in sub-Saharan Africa. I never thought I’d get to see it first-hand however.

Our first stop on the journey was in Arusha, a place not far from Mount Kilimanjaro, where Cosecsa has its headquarters. This is where I met the inspiring and feisty chief executive officer, Rosemary Mugwe. Mugwe has a background in women’s rights law and I felt inspired to see Cosecsa being led by this strong and forward-thinking woman.

Cosecsa is the largest surgical training college in sub-Saharan Africa. It is working to advance education, training, standards, research and practice in surgical care through the provision of in-service surgical training across 96 hospitals.

Given that 6.5 per cent of the global burden of disease can be treated with surgery, initiatives like Cosecsa are critical to improving patients’ lives and helping the most vulnerable people.

The first hospital I visited was Arusha Lutheran Medical Centre (ALMC) in Arusha city centre which holds the only CT scanner in the north of Tanzania. There I met Dr Frank Madinda, chief of surgery and a trainer. He trained in Cuba, before returning to practise in his native Tanzania. Now he provides surgical training in his home country. That afternoon he was supervising a neurosurgery trainee undertaking a craniotomy (the surgical removal of a portion of the skull) and invited me to observe.

Equally inspiring was Dr Catherine Mung’ong’go who is Tanzania’s only female paediatric surgeon. She comes from rural Tanzania, where women’s education is often not prioritised. However, Mung’ong’go’s mother stressed the importance of study and a local nurse inspired her to pursue a career in medicine. After achieving high grades in school, Mung’ong’go went on to receive a full scholarship to study medicine for five years in eastern Europe before returning to Tanzania to complete her training through Cosecsa.

She told me that she was in a serious and committed relationship at the time but her then boyfriend was extremely unsupportive of the idea of her leaving to train. Even so, she persisted and is now one of the most respected and highly regarded surgeons in the country, treating hundreds of children each year.

I also visited the mobile surgical skills unit which was donated by RCSI and travelled from Dublin in 2014. It is equipped with high-tech educational equipment including laparoscopy tools, monitors and suture skills training equipment. The unit travels around the region and is used to teach trainee surgeons in rural areas.

Our next hospital was Kilimanjaro Christian Medical Centre (KCMC) in Moshi, which is the largest tertiary hospital in the northern region of Tanzania. There we were greeted by three RCSI medical students, Sasha Molony, Namrata Soni and Marguerite O’Brien, who are undertaking a six-week clinical elective placement.

My mother is a nurse in an accident and emergency department in Dublin so I made a few comparisons when touring this one. I was shocked to learn that there was no triage system, which is a standard process of determining the priority of patients’ treatments based on the severity of their condition.

There was also an obvious lack of staff, services and resources as well as being pokey, cramped and very bleak with seriously ill patients everywhere.

One of the three paediatric wards in the hospital had quite young toddlers and children in it and I was informed that nearly all of them had severe malnutrition and mineral deficiencies, something almost unheard of in Ireland. To be honest, I found it all quite hard to process.

Later on, I sat down with a trainee from KCMC, Dr Charles Mubedi. Mubedi is from Malawi but is training in Tanzania to become a specialist urologist. When he finishes, he will return home to join the only other urologist in the country to start Malawi’s first ever urology training programme in Kamuzu Central Hospital, Lilongwe.

Mubedi explained that the majority of the surgical cases he sees are late stage cancers of the prostate and bladder. Bladder cancer is extremely common, most notably schistosomiasis from unhygienic and unclean drinking water highly contaminated with sewage. There is no prostate, breast or cervical screening programmes in place in Tanzania and many patients are reluctant to attend hospital due to financial restrains or social stigmas. This results in many cases presenting in the very late and terminal stages of disease.

She describes her work as trying to “turn off the tap, rather than mop up the mess on the floor”. She also spoke of too many cases reaching her at a palliative stage because of delayed diagnosis and lack of medical services in small rural areas. She is working with the Tanzanian minister for health and Irish Aid to ensure that all services offered to the children and families are free of charge.

I visited the on-site accommodation where the children and families stay while undergoing treatment. They have sleeping facilities, a school, playroom, nutrition plans and projects for the mothers to take part in such as jewellery-making. Scanlon has also started her own charity, helping to fund the oncology ward called “Their Lives Matter”, which aims to reduce the rates of paediatric cancer through infection control and increase the rates of early diagnosis through education, especially in rural areas.

Here I also met Dr Mabula Mchembe, a Cosecsa alumnus who specialises in fistula repairs, predominately in post-partum women. Women with fistulas in Tanzania can be shunned by their family and banished from their villages because of their symptoms, mainly incontinence. Here, Mchembe is restoring women’s dignity with a relatively routine surgical procedure.

I also had the opportunity to meet Fionnuala Gilsenan, the Irish Ambassador to Tanzania, who emphasised that there have been huge advancements in the area of maternal health as it has been a top priority for aid projects in Tanzania. It is phenomenal to know that such progress is being made.

Reflecting on my whistle-stop tour of Tanzania, my overall feeling is one of inspiration and gratitude that I got to witness first-hand the remarkable work. This training programme provides a long-term solution to the surgical workforce shortage in Africa.

Cosecsa is an forward-thinking and practical initiative, which, with support of Irish organisations, is helping to reduce mortality rates across the region through improved surgical care and bettering the quality of life for an entire population.