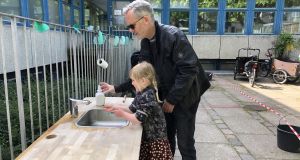 Brendan Sweeney and daughter Theresa (4) outside her daycare centre in Copenhagen. ‘Before you even go into the building, they have set up portable wash-hand basins with running water and soap and paper towels,’ says Brendan, who is originally from Co Cavan.

When Brendan Sweeney returned with his four-year-daughter Theresa to her daycare centre in Copenhagen in mid-April, after just one month of closure due to Covid-19, the “new normal” was apparent even before they went in.

Two corridors with markings indicating where to stand had been created, one going in and another through which to leave the large Studsgaarden Integrated Institution in Osterbro, northeast of the Danish capital’s city centre.

“Before you even go into the building, they have set up portable wash-hand basins with running water and soap and paper towels,” says Brendan, a long-time resident of the city, but originally from Ballyjamesduff in Co Cavan. “All the children and adults going in have to wash their hands – and there are also instructions on how to wash your hands.”

He must not go into his daughter’s room, “The Butterflies”, at drop-off or pick-up. However, although the children are assigned to rooms, they now spend most of their time outside.

Usually, the children keep rain wear and spare clothes at the centre, but now parents must bring them in and out daily, to ensure corridors are clutter-free and can be cleaned properly.

Another change was that they stopped providing breakfast and a hot lunch, so children had to bring in their own, but these meals were reinstated last week.

“It wasn’t because of the risk of contamination, so they said, it was to release people to do cleaning,” says Brendan. Their monthly fee of €330 for full-time daycare was temporarily reduced as a result.

When they returned after the closure, the playground had been cordoned off into little boxes, or “pods”, within which the children had to stay, playing with the same two other children all the time. But from May 18th those boxes were greatly enlarged and Theresa can play with all the children from her room. “She can now run about more and play with her best friends,” says Brendan, adding that there are 22 children and three full-time staff in her room.

The daycare centre can take up to 168 children but initially it reopened at only 25 per cent capacity. Brendan and his wife, Lisbeth, have to apply each week for Theresa to attend the following week.

Lisbeth is an essential worker, being a nurse manager at a care home, while Brendan is currently working from home as a lecturer at the Danish Institute for Studies Abroad. So far, the daycare centre has been able to accommodate their requests and, one month on, the centre is back to near full capacity, although the school-age children have left and the new intake of those aged six months to one year hasn’t started.

Theresa is going in five times a week, from about 8.30am to 3pm, compared with longer days of up to 7am to 4pm before. But Brendan knows one parent, with a boy the same age as his daughter, who had her son’s attendance at another centre reduced to two days a week.

In Ireland, we frequently look to Scandinavian countries for a lead in best practice for our childcare system. In planning for creches to re-open when Covid-19 hasn’t gone away, it’s no different.

The Minister for Children and Youth Affairs, Katherine Zappone, had said they were looking at “the Norwegian model among others” before announcing last Friday (May 29th) there would be a “play pod” system when childcare centres reopen here from June 29th. As social distancing is not possible with young children, pods would restrict interactions between closed groups of children and adults. This is designed to reduce the risk of infection and facilitate contact tracing if the need arises.

In the original Government reopening roadmap, only children of essential workers were to return to early years centres on June 29th but this has been significantly widened to include vulnerable children, those with disabilities and any whose parents need the service to return to work. Although, this will depend on the capacity of centres to take them.

It helps in this regard that the 38-week academic year for children entitled to two years of free preschool under the Early Childhood Care and Education (ECCE) scheme will be over at the end of June, just as creches can reopen. The Department for Children and Youth Affairs (DCYA) says that while it is prioritising the reopening of centres for the summer, once those plans are advanced, the focus will turn to resuming ECCE, to which every child is entitled from September 1st of the year they turn three.

However, capacity, along with demand for places, are still key unknowns for reopening. The 4,500 providers of centre-based care need more clarification before they can calculate how many children they might be able to take back under new operational and staffing recommendations. They will also be sounding out families to try to determine the level of demand for services.

The workability of “play pods” also needs to be thrashed out. It might sound like a simple  concept, with pods formed on the basis of current adult:child ratios, eg no more than six children aged two with one adult, but it is recommended that each pod always have two adults, to minimise the need for “floating” workers. This could be problematic for smaller centres with smaller pods.

“There is no evidence base on which to define a maximum pod size,” according to the infection prevention and control guidance issued to childcare settings last week. “Pod sizes should be kept as small as is likely to be reasonably practical in the specific childcare context.”

Meanwhile, Childminding Ireland has pointed out that there is nothing new about childcare pods, as childminders have been doing that for years in their own homes. They too can resume at the end of this month.

There are always competing interests at play in any national discussion of childcare: economic, political and commercial, as well as the varying needs and wants of parents. What’s best for the child is not always the sole focus, even if everybody says it is.

Early childhood education expert Prof Noirin Hayes of Trinity College, Dublin, has a “fundamental concern with the numbers” after last week’s announcement. While two adults in a pod allows you to have more children, she thinks that could be problematic, particularly in the initial re-introduction of young children to creches.

That gives one adult responsibility for six specific children “and is much more intimate”. Children will be coming back to “their memory of what a creche is like and it will be different”, she says, and they will need to feel secure.  “We have to remember that children are coming from a strange situation into a strange situation.”

Warning against “falling into the trap of having children seated for a long time, simply because that is manageable”, she stresses the importance of maximising the use of space so children can move around and play.

Adults will need explicit permission to lift and hug children, she adds. “They are in locus parentis and we need to strongly support them in doing the job they are trained to do.”

The DCYA has been developing and costing proposals for the phased reopening with the help of an advisory group that includes representatives across the sector. The group met for the first time on May 13th and are scheduled to meet weekly for six weeks after that.

Drawing up plans to reopen childcare facilities “is complex work and must balance a number of important issues”, said a DCYA spokesman ahead of publication of the first guidance documents.  These issues include: minimising the public health risk; providing early learning and childcare for pre-school children and meeting parental demand for these services as the economy reopens; ensuring financial sustainability of the sector when capacity restrictions limit income and parents cannot afford to cover any higher costs with higher fees.

The largest representative group of providers, Early Childhood Ireland, while welcoming the release of guidance on “play pods” has said that so far funding issues remain unresolved.

Parents will also need clear, official guidelines, Hayes adds, on when they can and can’t send children in, that “gives staff confidence to say to a parent ‘not today’.”

In Copenhagen, Brendan and Lisbeth have been frequently updated by the local authority on the changing daycare rules. They have no safety concerns and the children seem to be accepting of altered routines.

Brendan laughs as he recalls how he has explained the Covid-19 pandemic in English to his bilingual daughter, in terms that are a throwback to his native land. Now she is going around talking to people about “The Emergency”.

Read: You take the child kicking and screaming from the car?

If the bank valuation drops on a house we want to buy, will the seller negotiate on price?
9