Want the baby to stop crying? Be Danish. Or don’t breastfeed 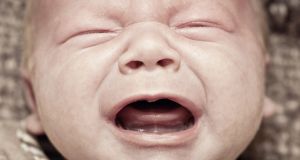 Want to have a contented little baby? Trying having it in Denmark or Japan. An analysis of global studies of infant fussing, published this week in the Journal of Pediatrics, found that Danish, Japanese and German babies cry the least, while Canada and Britain top the league for wailing babies. The researchers also found that breastfed babies cry more than bottlefed babies.

The study, carried out at the University of Warwick, included data from 8,690 infants and found that the mean period of crying is a nerve-shattering 117-133 minutes throughout the first six weeks of life, dropping to 68 minutes by the time they reach 10-12 weeks.

(It debunks the idea, clung onto by parents everywhere, that crying “peaks” at six weeks: rather, newborns cry pretty solidly for six weeks, and then the misery starts to decline.)

Canadian babies have the highest rate of colic – defined as inconsolable crying for more than three hours a day, on at least three days, for three consecutive weeks. One in three Canadian babies has colic at 3-4 weeks, along with 28 percent of British babies, and one in five little Italians.

Irish babies were not included in the study, although in a recent survey by Colief, an unfortunate 41 per cent of new mothers reported having babies with colic.

The study also revealed that Denmark not only has the world’s second happiest adults, one of the most enlightened approaches to raising girls, an enviable childcare system, it is also home to some of the world’s happiest infants.

Only 5.5 percent of Danish babies have colic, while only 2 percent of Japanese had it in their first six weeks.

Away from the headlines about cheerful Danes, stoic Japanese and miserable Canadians, the study sheds intriguing light on how variations in parenting styles may affect infant happiness. The authors speculate that, along with genetic variations, other factors ranging from “economic conditions, such as less social inequality, to caretaking patterns such as responsiveness, carrying behavior and management” might account for the differences.

This is a polite way of saying that the Danes are better at being parents.

Danish parents are regularly credited with having a healthier, more relaxed approach to parenting, preferring to give their children what the book The Danish Way of Parenting calls “proximal development” – or the space to grow and explore. They do not, we are told, hover like helicopters over the cribs of their infants, literally or metaphorically – instead opting to put their offspring to sleep in prams outside, where they believe the air is cleaner.

According to a 2008 survey carried out in Finland and published in the Journal of Circumpolar Health, babies who nap outside typically sleep for longer stretches, and therefore have less opportunity to cry. (I’d like to posit an alternate theory: when the babies are outside, their parents just don’t hear them.)

Danish parents’ more relaxed approach to parenting might also be helped by the fact that they get long periods of paid maternity leave: women in Denmark are entitled to four weeks of pregnancy leave, followed by 52 weeks of paid parental leave, to be shared between parents.

One thing that does not account for Denmark’s happier population of infants is the country’s relatively high rate of breastfeeding.

Controversially, the study found that babies who are bottlefed cry less than babies who are breastfed. “Samples which included babies who were bottle-fed or mixed-fed (breast and bottle) had significantly lower fuss/cry durations,” the researchers wrote.

“In contrast, samples which included babies who were breastfed had significantly higher fuss/cry durations at 3-4 weeks of age.” The authors suggest that breastfed babies wake more often at night, which means more time to cry.

This isn’t the first piece of research to find that breastfed babies have more “challenging temperaments” – a 2012 study in the online journal Public Library of Science ONE found that “compared to formula-fed infants, breastfed infants were reported to show greater distress, less smiling, laughing and vocalisation, to be slower to calm down following distress or excitement, and more difficult to soothe by care-givers”.

It’s worth emphasising that the findings in relation to breastfeeding, which has proven positive effects on children’s health, relate only to crying in the early weeks.

In my own, small-scale and highly unscientific study of three infants, parental style and choices do have an impact on infant temperament, at least in the short term.

Child number one was breastfed and subjected to the “precious first-born” style of parenting, wherein one or both carers reacted instantly to every whimper that emanated from the crib. She cried for four months solid, but has turned into a very even-tempered young person.

Child number 2 arrived hot on the heels of the first, was fed a combination of formula and expressed milk, and as one of two babies, had to learn to wait. He never cried, and has also turned into a very even-tempered young person.

Child number 3 arrived six years later into the arms of four adoring carers, who cater to her every whim. She was breastfed. She had been on three continents by the time she was three months old which, the experts promised, would make her a flexible, adaptable person. Instead, it just gave her chronic jetlag. Nearly three years later, she still awakens twice or three times a night.

So if you want a contented little baby, you could try moving to Denmark or Japan. You could try leaving the pram outside. You could give up breastfeeding. You could, and probably should, stop hovering over the crib, or racing to cater to every whimper. In my own experience, you should definitely avoid long-haul flights.

Alternatively, you could relax a little, and wait it out. I’m still clinging onto the thought that very few teenagers wake three times a night, or cry for 117-133 minutes a day.

This article was amended on Friday, April 7th, 2017, to make clear that the findings of the study in relation to breastfeeding relate only to babies crying in the early weeks.