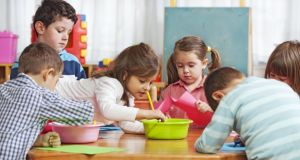 Parents can encourage emotional awareness from a very young age, with the message that all feelings are okay; it is your behaviour that is going to get you into trouble. Photograph: Thinkstock

‘Resilience” is a big word that preschoolers in the Barnardos project in Knocknaheeny, Cork, know nothing about but they are already learning how to solve problems themselves.

Managing their own anger is an important social-emotional skill they are being taught on the Tús Maith programme, with the help of Twiggle, a puppet turtle.

What’s known as “the turtle technique” involves three steps for children to follow if they have a problem and feel themselves getting angry, explains project leader Jenna Russell. They are encouraged to “Go into your shell, take deep breaths and think of solutions, and come out of your shell when you are ready to solve the problem.”

With plenty of practice until it becomes second nature, these three- and four-year- olds really do “get it”, she says. Some have even been known to say to parents who are losing their temper, “You really need to do turtle . . .”

As in everything, parents have to be role models for resilience. “Attitude is key; being positive and solution-focused and knowing that everything is not going to go your way,” she points out.

Parents can encourage emotional awareness from a very young age, with the message that all feelings are okay; it is your behaviour that is going to get you into trouble. Speaking professionally and personally, as a mother of a 12-year-old, Russell says how to make children more resilient is a hot topic.

“There’s a lot of pressure on young people, and being strong enough in the face of peer pressure is a huge concern. You want them to be able to have the strength and the confidence to be different from others at an age when it’s really tough to do that.”

She sees worried parents being overprotective, but stresses the importance of giving children manageable risks and small steps to independence.

People struggle with the concept of resilience, says Teresa Heeney, chief executive of Early Childhood Ireland, who describes it as “a frame of mind: I know how to cope with adversity, in whatever form it presents itself, when I’m a toddler, when I’m 13 and when I’m 30”.

Having opportunities for all sorts of play is critical for the development of this trait. Yet we are depriving children of risky play and rough-and-tumble play, she says.

“We adults don’t understand rough-and-tumble play – we hear squeals and hear things we confuse with aggression. While some of it may appear aggressive, the reality is that there are important social interactions going on and children learn important things. They learn about limits, they learn about empathy.”

A pilot 12-week programme in teaching children aged 11 to 14 emotional and social skills has started this month in several primary and secondary schools. It will be evaluated through questionnaires completed at the beginning and end.

“One of the first things we do is optimism training because it is something we think is largely missing from school curriculums,” says Galway-based social entrepreneur adviser Martina von Richter Japy, who is managing the programme.

They will also focus on empathy, compassion for self and others, creativity and being allowed to make mistakes. Research shows that teenagers with thoughts of suicide or, in extreme cases of those who take their own lives, are often ones who did not get exam results they had hoped for “and everything falls apart”, she says.

Based on a mindfulness approach, each weekly workshop includes meditation.

“We are the only Irish-developed programme and we see ourselves as being holistic,” she explains. It is about teaching adolescents how to cope with adversity and to expect it as part of life.

Most of the youth services in Ireland do “fire-fighting”, she says, and struggling teenagers will often ask why nobody taught them about mental health issues when they were younger.

There has been no problem finding schools to take on the programme – the first five are in Co Galway, Mayo and Louth – and indeed they have a waiting list for further courses. The right facilitators are key, as von Richter Japy explains. Ideally they are “self-trained optimists” who can convey positivity through personal stories. “We need,” she adds, “to inspire youth to go off the beaten track and be creative.”