Marriage could drive you to drink – and here’s the proof

Many men drink less when they marry and many women drink more, according to a 10-year study 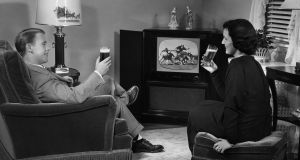 Does marriage drive people to drink? Not as dramatically as that phrase suggests but tying the knot seems to influence drinking by men and women. For instance, a 10- year study at three US universities found that many men drink less when they marry and many women drink more.

The way it seems to work is this:

The wife’s consumption of alcohol is, however, also influenced by the man’s consumption – so if the husband still drinks more than the wife, then the wife tends to increase her drinking. In other words, they converge.

A similar effect has been noticed by researchers in regard to eating. Imagine that a man who eats too much moves in with, or marries a slim woman who eats healthily.

The man now eats more healthily to please his wife. But that doesn’t mean he becomes slim and trim and switches to the Mediterranean diet. Instead the wife begins to eat more like he eats so, again, they converge. No longer does she limit herself to a stick of celery while he tucks into a steak – soon enough, the celery will be abandoned in its plastic wrapping while she has what he’s having.

That, needless to say, helps to pile on the pounds. This may all be aided and abetted by a fun-crushing mortgage that keeps them indoors or – if they are also managing demanding jobs and a child or two – by exhaustion.

Divorce changes the drinking patterns. You might expect both genders to drink more after a divorce but the research suggests that while men do, indeed, drink more in the aftermath of a divorce, women drink and eat less. It isn’t that they are unaffected – instead of coping through drink and alcohol some women become depressed instead.

That’s something men and women need to watch out for because divorce is usually a long and painful process – getting through it in good shape in terms of wellbeing can take care and support.

We don’t know if the extra drinking and eating by women in marriage is significantly bad for them so we don’t need to panic yet. But if a man would like his wife or long-term partner to be the slim lass he married, then the way to get her to cut down is, I’m afraid, for him to cut down on the booze and the sugary food himself so as to influence her in his healthy direction.

A few trips to the gym – for him – every week will really get things going. Thing is, he’s got to keep it up – if he slips back she’ll slip back too.

Sorry lads, I know it’s a pain in the neck but look on it as the burden of manhood.

On a not unrelated topic, congratulations to readers who have made it through Dry January or who are within a whisker of the finishing line. Some will have found it easy and for others it will have been a long road.

If you found it tough going, you might give some thought in the future to whether the booze is getting a hold on you and whether you might need to do something more long-term about it at some point. But it’s an achievement for all and a pat on the back is in order.