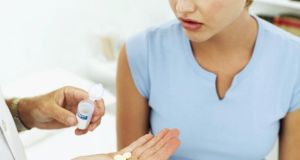 The effect of a benzodiazepine is calming without too much sedation, although they usually cause tiredness. The drug works by increasing the power of the brain’s natural calmer, the neurotransmitter GABA. Photograph: Stockbyte

“Kids are different today, I hear ev’ry mother say Mother needs something today to calm her down And though she’s not really ill, there’s a little yellow pill She goes running for the shelter of a mother’s little helper And it helps her on her way, gets her through her busy day.”

The song Mother’s Little Helper, released by the Rolling Stones in 1966, referred to the sudden popularity of the anti-anxiety medication Valium among stressed-out, unfulfilled housewives who could obtain it easily from their GPs.

When the benzodiazepine drug marketed under the name Valium was released by Roche Pharmaceuticals in 1963, it quickly became a blockbuster drug that was popular in Hollywood and gained notoriety for its seemingly miraculous effects. It was hailed as a much safer alternative to barbiturates, which had a high potential to cause addiction and were very dangerous in overdose.

Valium became the most widely prescribed medicine in the world, and made the company one of the most profitable companies in the world, but it soon became apparent that people were having difficulties stopping their medication and the withdrawal effects were similar to the symptoms of anxiety that had led them to take the drug in the first place.

Several reports published in recent years have highlighted concerns that “benzos” are still being too widely prescribed in Ireland and too often used. A report from the benzodiazepine committee of the Department of Health and Children in 2002 suggested that one in 10 holders of medical cards was taking them. In 2010-2011, the National Advisory Committee on Drugs and Alcohol carried out a drug prevalence survey, which reported that 14 per cent of adults between the ages of 15 and 64 had taken sedating tranquillisers at some point in their lives, and 7 per cent in the past year. This had increased from the previous survey in 2007; most of the meds were on prescription and women were more likely than men to be prescribed them.

Dolores Keating, an honorary senior clinical lecturer at the Royal College of Surgeons in Ireland ’s (RCSI’s) school of pharmacy, and head of pharmacy services at St John of God Hospital, says the current guidelines advise to use benzos only for anxiety that is severe and distressing and only for short periods of two to four weeks.

Next week, Keating will give a lecture on benzos and their use at the next RCSI MiniMed event, which is entitled “Mammy’s little helper: the Irish relationship with anxiety medication”.

“The current guidelines for treating anxiety disorder do not recommend the use of these meds as a first-line treatment. Talk therapies such as cognitive behavioural therapy [CBT] are recommended as first-line. For people with more severe symptoms or for whom the psychological therapies do not work, antidepressants are the medication used first-line as they are not addictive,” she says.

The effect of a benzodiazepine is calming without too much sedation, although they usually cause tiredness. The drug works by increasing the power of the brain’s natural calmer, the neurotransmitter GABA.

“Anxiety disorders are more common in women than men, and women are more likely to be prescribed benzos to cope with stressful situations such as grief, chronic physical illness or adjustments to a life change. While benzos will relieve the symptoms of anxiety, unlike the psychological treatments they do not deal with the problems that cause the anxiety in the first place,” Keating points out.

She advises that there is help available for people who feel they may have a problem with this type of medication. Their own prescriber should be their first port of call and there is also information on support services on stjohnofgodhospital.ie and the HSE website drugs.ie

Keith Gaynor, senior clinical psychologist at St John of God outpatient department, says most of the patients he sees have anxiety or depression, or both, and 90 per cent of his job is talk therapy. He says a course of six or eight sessions of CBT has very good outcomes for people suffering from anxiety.

It involves training people to face the cause of their anxiety instead of avoiding it and teaching them to challenge their negative, catastrophising thoughts.

Gaynor advises people to address the key building blocks of exercise, diet and sleep first and to read self-help books such as Overcoming Anxiety by Helen Kennerley and Feel the Fear and Do it Anyway by Susan Jeffers. For some people, this will be enough to help them manage their anxiety, he says, while others might need to see a therapist or to attend one of the larger workshops on managing anxiety held by the HSE and organisations such as St John of God.

Prof Paul Gallagher, the head of the RCSI school of pharmacy, highlights the challenges for prescribers in recommending longer-term psychological treatments to people who cannot afford them, and the difficulties in accessing such services through the HSE.

The RCSI MiniMed lecture and panel discussion is free and takes place from 7pm to 9pm next Wednesday, February 25th, at the RCSI, 123 St Stephen’s Green, Dublin. Registration is essential in order to guarantee a place. Register online at rcsi.ie/minimed and you can join the conversation online, on the night, on Twitter at #RCSIMiniMed.

What a heavenly home: from dilapidated church to chic retreat
3

Irishman in Philadelphia: Mass protests across the US felt inevitable
7

The death of the bra: Will lockdown’s great lingerie liberation last?
9