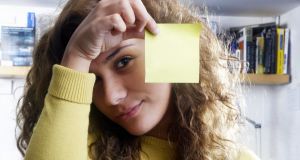 Given that IBS is very common among young women of college-going age, the implications of impaired memory performance are clear. Phtoograph: Getty Images

People who suffer from the common gastrointestinal disorder irritable bowel syndrome (IBS) have more stress-related memory problems than others, according to a new study by Cork scientists. The researchers also found that levels of the stress hormone cortisol were related to poor memory performance. While stress has long been known to affect gut symptoms, this is the first study showing that stress also impacts on cognition in IBS.

Poorer test performance
When patients with IBS were asked to perform a test measuring visuospatial memory – the type of memory that cab drivers use to navigate around busy city streets – they displayed poorer performance than people without IBS.

The new findings by scientists based in the alimentary pharmabiotic centre (APC) at University College Cork are published in the current issue of Psychological Medicine, an international psychiatry and psychology journal.

Dr Gerard Clarke, a lecturer in the department of psychiatry and faculty investigator in the APC, said IBS was normally associated with symptoms in the gut such as pain, bloating and problematic bowel habits. However, research over recent years has shown that changes in how the gut and brain interact, along with what is known as the brain-gut axis, may be an underlying cause of this complex condition. While many studies have focused on gut problems, very little is understood about how fundamental brain processes such as cognition are affected in IBS.

He explained: “This is the most detailed assessment of cognitive function in IBS to date and given that IBS is very common among young women of college-going age, the implications of impaired memory performance are clear. We must emphasise the memory fault we have identified in IBS is subtle, and not on the magnitude seen in patients with mild cognitive impairment.

“If these memory deficits prove to be a stable feature of IBS, it will vastly improve our understanding of this condition and may pave the way for therapies aimed at reducing the impact of stress in IBS, while also helping to alleviate the negative impact on cognition in this debilitating condition.”

The study found that people with IBS made twice to three times as many errors on the visuospatial test as the healthy control group, which Dr Clarke said was still low level compared with mild cognitive disorder or Alzheimer’s disease.

He said the study was a snapshot of one time point and said it was important that the participants were followed to see if their memory problems continued as their symptoms varied.

Miscarriages and IVF: chasing a rainbow baby (and when to stop)
4