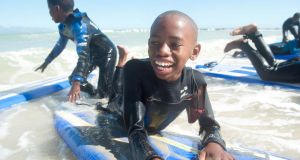 Some of Cape Town’s more famous waves have been commandeered to facilitate a new community health project that uses the therapeutic benefits of surfing to help children who live in townships and who have been traumatised by violence, poverty and drugs.

“As well as teaching the kids how to surf, we put them through a set of exercises to produce positive social behaviours,” says Conibear.

“There is an element of teaching them how to cope with their environment, using breathing exercises, and practising coping skills”.

The need for such an intervention in Cape Town is great, as many of the children on their books have experienced a level of violence and social dysfunction in their short lives that few of their contemporaries in Western societies ever encounter.

The townships and informal settlements around Cape Town are hotbeds of centuries-old gangsterism, as well as the cornerstones of the apartheid regime’s segregation policy, making them some of the most difficult and dangerous places in South Africa to grow up.

According to official statistics, Cape Town registered 2,451 homicides in 2015 and the vast majority of these were gang-related murders in townships located across the Cape Flats, a low-lying flat area of land located southeast of the city and its surrounding mountains.

Research carried out by Waves for Change revealed that children from townships experience eight traumatic events a year linked to violence, drugs and poverty.

Putting that into perspective, Conibear says children in the US and UK are expected to experience four in their lifetime.

Living in this type of environment causes behavioural and learning difficulties among the affected young people who, as a result of continued exposure, suffer acute emotional and psychological trauma, says Conibear.

Indeed, many of the children display signs of suffering from post-traumatic stress, a disorder more normally associated with soldiers who have returned from war zones than children living in the suburbs.

But 2012 National Schools Study statistics for under-18s in South Africa provide ample evidence as to why this might be the case: 48.7 per cent have been exposed to violence at home, or in their community, and nearly 20 per cent have been sexually abused.

Connecting with these kids is typically very difficult, but Conibear has found a way in.

“We found surfing is something that these kids really want to engage with. It has an element of danger; it’s exciting, and close to nature,” he says.

The project took root after Conibear, who travelled to South Africa to take up an internship on a Western Cape wine farm, began taking the children of the farm labourers working with him to the beach when he went surfing.

“I’d stick the kids in the back of a crappy old car I’d borrowed and drive them out to the beach,” recalls Conibear.

“Muizenberg may be one of the most [racially] integrated beaches in South Africa, but children from the townships don’t get to go.”

Getting to know the kids and hearing their harrowing everyday stories had a profound effect on the Englishman, who soon found that more and more children were turning up for his impromptu surf expeditions.

Despite the vast array of social problems these children face, the reach of community health services into South African townships is minimal.

Conibear set about establishing a programme with the help of township residents Apish Tshetsha and Bongani Ndlovu that could plug the gaps in social service delivery to help the children on the edge of society.

“We go to schools and ask teachers which are the kids who are extremely dysfunctional and we target them. There are no rules; they don’t have to do well in class to take part. If they get into trouble, we don’t kick them out,” he says.

From an initial reach of 10 children in the township of Masiphumelele, the programme has grown to reach hundreds of children, teachers and parents annually.

The programme is delivered by 19 trained surf instructors who are supervised by an inter-disciplinary team of health professionals.

“For the most part they don’t really know what they are getting involved in, other than surfing,” says Conibear.

“We don’t try to draw out their problems, but instead try to build their inner strength and coping mechanisms.

“We construct a positive surfer persona – someone who is strong, brave and looks after their friends – they aspire to becoming.”

Since the beginning of 2016, Waves for Change has registered 240 kids.

Of those, 166 have attended the weekly sessions held at three different beaches at least 75 per cent of the time.

One thing many of the children who take part in the programme begin to display is a high level of resilience in difficult situations, says Ashleigh Heese, Waves for Change’s site manager for Lavender Hill – an area where gang activity is particularly high.

One such resilient character is Rabi, a 13-year-old who started learning to surf earlier this year.

The night before she took part part in her first surfing competition in June, her home was robbed by two armed men.

“Rabi lives with just her grandmother. That night she had a knife held to her throat by the thieves as they went through the house. But, despite this traumatic experience, she was waiting to be picked up the following morning at 7am by our team. She still wanted to compete,” says Heese.

During one of her surfing lessons, Rabi says she likes the sport and the programme for many reasons: “It builds my confidence and gives me lots of positive energy. I like that it [surfing] is really difficult; that I have to practise hard to be good.”