Did a cataract operation improve my memory?

The playwright Thomas Kilroy said that’s what happened after his surgery. Could it be true? 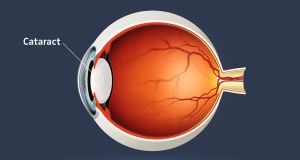 Cataracts, a clouding of the lens in the eye, cause half of all cases of blindness and 33 per cent of visual impairment worldwide. They are most commonly due to aging. Photograph: iStock

The Irish playwright Thomas Kilroy said that when he had cataracts removed from his eyes his memory improved. He was delighted with the improvement in his eyesight and the memory boost was a welcome bonus. Bad eyesight and memory loss had been bothering him for some time. Now, life was taking on a welcome new outlook.

I was amazed at this claim. Yes, of course his eyesight improved when the cataracts were removed, but surely memory is a completely different thing altogether? Was he serious? I must admit, I was highly sceptical. It didn’t seem possible to my non-medical/scientific brain that such a thing could happen. How could his memory improve? I mean, we all know playwrights have wonderful imaginations. After all, that is one of the reasons why they write plays in the first place, isn’t it?

The reason I was so interested in this subject was because I was going for a cataract operation the following week and, as it so happened, my memory was beginning to slip (why wouldn’t it at 80 years?). So, if this guy is right, I could be killing two birds with the one stone. Bingo, new eyes and my once great memory back on track. I might be able to get my job back in the newsroom, although I might appear a bit of a dinosaur to the present bright young incumbents.

By the way, for those of you who do not know what cataracts are, they are a clouding of the lens in the eye which leads to a decrease in vision. Cataracts cause half of all cases of blindness and 33 per cent of visual impairment worldwide. They are most commonly due to aging.

They kind of sneaked up on me. Never realised what was happening. I knew my driving was going to hell and my judgment was not as good as it used to be. My reversing into parking spaces was poor. Driving was particularly dodgy at night and headlights from other cars would blind me. I could only drive slowly, which usually resulted in younger, impatient drivers tailgating me and trying to run me off the road. I nearly gave up driving at night, except to drop down to the village for an evening meal with my wife.

Being a slow learner, I didn’t realise what was going on. I put it down to old age. I have convinced myself that everything that goes wrong nowadays is due to old age. The cracks are starting to appear, big time. Here was the big clue in front of me – hopeless, dangerous night driving – and I could not see the reason for it. (I’ll never get into the Garda Síochána’s detective unit, that’s for sure.)

The clues were everywhere. But, like Mr Magoo, I could not see them. Take my golf for instance. I mean I was never in the Rory McIlroy league or ever likely to be, but I could always finish 18 holes without having a heart attack or losing too many balls into the water or the gorse bushes. But suddenly I began misjudging shots, hitting fresh-air shots, handicap going out, losing bets on rounds with friends. Yes, the roof was falling in. And still the penny never dropped. Never copped on that all this was very strange. No, it was simply old age stalking me again: the usual mantra.

Then, suddenly, the sorry saga came to an end and the reason for my discomfort and frustration was explained to me.

I had gone to my optician to get a new pair of reading glasses. She did an eye test and announced I had bad cataracts in one eye and they were starting to develop in the second. They would have to be removed immediately.

I can now proudly declare that my eyesight is exceptionally good. I can practically see the grass growing

Wow, a mixture of relief and concern followed this diagnosis. Glad that I knew what had been happening to me, but a little concerned about what would happen in the operation (would it go wrong and would I bleed to death?)

I need not have worried. It was the easiest and most painless hospital procedure I ever had. It only took about half an hour. It is a simple operation with an almost 100 per cent success rate. I had spent more time answering questions and filling in forms in triplicate then having the actual job done.

After the operation I was wheeled back to my ward and got a lovely cup of tea and one of the nicest scones I ever tasted. I’d nearly go back again to get one of those scones.

I can now proudly declare that my eyesight is exceptionally good. I can practically see the grass growing. No problem with night driving. Long distance eyesight is simply brilliant. My long distance sight is so good that my golf colleagues are constantly asking me to tell them where their ball went. I am quite chuffed by this new recognition. I am pleased to be able to help. Of course I have no difficulty in finding my own ball, mainly because it doesn’t go very far.

Has the operation improved my memory, as it did for Thomas Kilroy? I suppose it has to a certain extent insofar as everything has quickened up considerably and all my mental reactions seem to be better. I’m generally much sharper in my mental reflexes. Sorry for doubting you, Thomas. But please don’t ask me to remember names. It was a big problem before the operation and it still is, I’m afraid.

That reminds me of the old memory joke about the man who visits his friend in a nursing home. To test the patient he posed the question: “Do you know who I am?” The friend replies: “Ask the matron, she’ll tell you.”