Ask the Expert: Why do young children pull out their hair?

If you have a parenting question, send your query to health@irishtimes.com 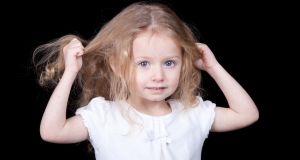 If hair-stroking escalates to hair-pulling, it can result in thinning or bald patches especially if it is severe or continues over an extended period. Photograph: Thinkstock

Q My granddaughter is almost three and is continually pulling out her hair. She now has a bald spot on her head. Her mother had applied almond oil to the scalp at night to prevent this, and has her hair cut very tight, but to no avail. It was suggested that she get her a doll with long hair as a diversion but this did not solve the problem. We are really worried about the pulling and whether her hair will regrow.

A The compulsive habit of hair- pulling is a more common childhood problem than people think. Some studies estimate that up to 4 per cent of the population could be affected at some point in their lives, and the condition is prone to under-reporting. Though it can affect adults, it is far more common in children and tends to affect more girls than boys.

The severity of a hair-pulling habit can vary greatly: some children engage in it for only a short period, and others go on to develop a severe habit.

The formal name for hair-pulling is trichotillomania, though this diagnosis is usually not made until children are older as many toddlers grow out of the habit.

Why do young children pull their hair?

Most babies and toddlers develop sensory habits that they use to comfort or relax themselves. The most common are thumb-sucking, using a soother or holding a special soft toy or blanket. However, many children are fascinated by their hair and its texture, and might go through a phase of twirling it or stroking it in a way similar to thumb-sucking.

These sensory habits are frequently used by children when they are agitated or tired, and are often part of the ritual of getting to sleep. In many situations the child is not even aware when they are engaging in the habit.

However, while most young children’s sensory habits are harmless, if hair-stroking escalates to hair-pulling, it can result in thinning or bald patches, especially if it is severe or continues over an extended period.

There is a lot you and your granddaughter’s parents can do to help her stop the habit and reduce its negative impact. The first is to take the time to notice the exact specifics of why, when and where she pulls her hair.

Is it just at night-time, or does she pull her hair at other times, for example when watching TV or playing certain games? Is it part of her falling-asleep ritual?

Also observe any time when the habit is less, or similar situations when your granddaughter does not pull her hair. For example, are there times she falls asleep without hair-pulling?

This will give you and her parents clues to strategies that you can help her build on to reduce the habit.

Give your granddaughter alternative habits or strategies

Once you have a clear idea of the pattern of her habit, the key is to help her learn alternative sensory habits at the time she is most likely to pull her hair. For example, as you suggest, you might give her a doll with long hair and encourage her to stroke this.

It is important to remember that lots of different things work for children, so you have to persist to find what works for your granddaughter. You could use a rattle, a soft toy or a blanket with an interesting texture, or a squishy stress ball that is fun to squeeze.

Some parents show their children how to brush their hair, which gives them the sensory input they wish for and then leave a brush for them at night beside their pillow; this strategy is likely to work when your daughter is a little older.

If the hair-pulling habit is related to sensory oral stimulation (for example, some children eat their hair after pulling it), you might employ new sensory oral habits such as a teething toy or soother, or something interesting to chew during the day.

Remind your granddaughter to use other habits

If you see your daughter pulling her hair, avoid giving out or saying “Don’t pull your hair,” which is ineffective and can lead to your granddaughter feeling bad about the habit. Instead, focus positively on a habit you want her to develop. For example, you might say “Let’s give Teddy a squeeze,” or “Let’s rub dolly’s hair.”

Another strategy is to make creative barriers to hair-pulling. For example, some parents cut their children’s hair short, or put a hat or gloves on their child at night if that is the time the habit is most prominent.

The key is to make this a fun exercise with your daughter; you can talk about putting on special night gloves. During the day some parents put fun plasters on their children’s fingers that make it difficult for them to pull their hair.

The goal of these strategies is to create a temporary block for your child that helps break the bad habit while they are learning new ones.

Remember, it takes time to break a habit and to learn a new one. So be patient, gentle and persistent as you help your granddaughter. There is also a chance that she will move on from the habit in her own good time. There is a growing number of good online resources and books on the subject.

I can recommend Ruth Golomb’s articles and books, notably The Hair Pulling Habit and You: How to Solve the Trichotillomania Puzzle and Stay Out of my Hair.

Dr John Sharry is a family psychotherapist and codeveloper of the Parents Plus programmes. He will be delivering a course in parenting babies and toddlers (age up to two years) on Saturday, November 14th in Dublin. See solutiontalk.ie

Mental health: How to mind yourself during the shut-down
2