Are you a good liar? Not as good as you once were, say Ig Nobel winners 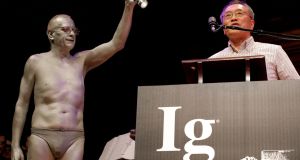 Atsugi Higashiyama accepts the 2016 Ig Nobel Prize in Perception for “investigating whether things look different when you bend over and view them between your legs” during the Ig Nobel prize ceremony at Harvard University in Cambridge, Massachusetts. Photograph: Brian Snyder/Reuters

Sometimes the Nobel Prize in Medicine goes to a somewhat oblique achievement. Japanese scientist Yoshinori Ohsumi was awarded this year’s Nobel for discoveries related to the degrading and recycling of cellular components.

Ohsumi was honoured for groundbreaking research into autophagy, the process with which human cells internally “eat” damaged and out-of-date components. These are then recycled. The word autophagy derives from Greek words meaning “self -eating”.

How does this impact on our health? When autophages are damaged, they can trigger diseases such as diabetes, cancer and Parkinson’s.

Ohsumi’s work has also led to a better understanding of how the human body adapts to starvation and infection.

The alter ego of the Nobel Prize is the Ig Nobel. Awarded a week or so before the formal Swedish ceremony, the awards are presented at Harvard University by actual Nobel winners to researchers whose projects “first make people laugh, and then make them think”.

Described by Nature magazine as coming with little cash, (winners receive a 10 trillion Zimbabwean note – worth about 40 US cents)but much cachet, the Ig Nobels can also highlight oblique research. But when you scratch the surface they inevitably involve an appealing dose of eccentricity.

This year’s Ig Nobel in Medicine went to five German scientists for scratching just such an itchy surface. Their research, published in the journal PLOS ONE, showed that if a person had an itch on the left forearm, they could relieve the itch by looking into a mirror and scratching the right forearm. So what, you might say. But for people with an intense and intractable itch, the reduction in itch perception, prompted by the mirror image manoeuvre, could be a useful non- pharmacological treatment for a distressing symptom.

In keeping with the Ig Nobel theme of improbability, the psychology prize went to a team of researchers who asked 1,000 liars between the ages of six and 77 how often they lied.

Their aim was to look at lying proficiency and frequency across different age groups as the ability to regulate or inhibit certain behaviours changes with age. Children are good liars it turns out, while young adulthood coincides with peak lying proficiency. And the older we get, the worse our lying abilities become.

“Likewise, lying frequency increased in childhood, peaked in adolescence, and decreased during adulthood,” the researchers wrote in a 2015 journal article.

They also acknowledged the participants could have been lying to them all along, a factor some more seriously minded researchers may want to consider when presenting their results.

The peace prize mined similar territory. It was won by a paper titled “On the reception and detection of pseudo-profound bullshit” – which looked at “seemingly impressive assertions that are presented as true and meaningful but are actually vacuous”.

Canadian and US researchers created BS statements by putting buzz words into a sentence structure with no real meaning, for example, “hidden meaning transforms unparalleled abstract beauty”. They found that certain variables, such as belief in the paranormal, could predict whether a person would rate the pronouncements as profound.

Warning that bullshit may be more pervasive than ever as means of communication increase, the philosophers asked 280 students at the University of Waterloo to rate the “profoundness” of real and invented statements on a scale of one to five, and to search for meaning in those statements. Students most receptive to bullshit were “less reflective” and “lower in cognitive ability”.

In time-honoured fashion, the researchers admitted their study had limitations, saying: “Although this manuscript may not be truly profound, it is indeed meaningful.”

Meanwhile, two Japanese researchers won the Ig Nobel for perception. The visionary research found that images of scenes appeared brighter and more distinct when viewed with the head inverted (looking through your legs) than when standing upright. One to keep in mind the next time you visit an art gallery.