From Ireland to the US: a brief migration history 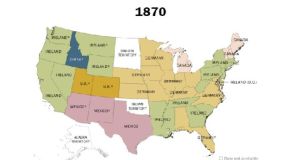 The Pew Research Center has used US Census Bureau data to create a series of maps showing the top country of origin for for foreign-born migrants in the US by state and year, 1850–2013. In 1870, 1.8 million Irish-born people were living in the US. Image: Pew Research Center 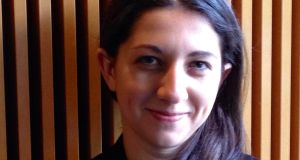 Dr Sara Goek: ‘Each generation of Irish-born migrants to the US had its impact and today about 40 million Americans claim Irish ethnicity.’

“People imagine if they were in America it would be all sunshine. There is rain, snow, and frost too, so that it is a foolish idea to think when you get to America it is only to make money.”

So wrote tailor James Chamberlain from Boston to his mother and brothers back in Mitchelstown, Co Cork in the early 1890s. He had arrived in 1888, one of about 4 million Irish who emigrated to the United States in the post-Famine era (1850 to 1929).

In 1890 the Irish-born population in America reached its peak at nearly 1.9 million. Add to that the second generation, and Irish America totalled 4.8 million people, 13 per cent of the population. They settled predominantly in urban centres in the northeast quarter of the country and as the west opened up many followed opportunities there.

While the Irish continued to arrive in succeeding decades, the geographical net widened and different nationalities came to dominate the influx.

“Immigration has killed the country,” Chamberlain lamented in another letter. “It is nothing to see seventeen hundred immigrants every other week at the wharfs: Swedes, Poles, Russian Jews, Hungarians and Bulgarians, and the Italians knock them all out.”

Far from praising his compatriots, he castigated those who took advantage of the new arrivals as well as their own people. Quite perceptively, he realised the American dream would fade not due to the immigrants, but to the employers who denied them fair wages.

An excellent new interactive map from the Pew Research Center (above) illustrates not only the changing nature of America’s immigrants, but also the effects of legislation over time. During the Famine, nothing prevented hundreds of thousands of Irish from settling in the US. The first restrictions cut off the flow from Asia in the late 19th century, which explains the disappearance of the Chinese as the main foreign-born group on the west coast between 1880 and 1900. Instead, industrialists and farmers looked increasingly to Mexico for labourers.

From the 1920s, Congress expanded constraints, capping the total number of immigrants and establishing quotas based on nationality. This system was inherently discriminatory, giving preference to migrants from northern and western Europe. The 1965 Hart-Cellar Act abolished the quotas and opened the door to an increasingly globalised flow based on family reunification and skills, as well as the admission of refugees. By 1990, less than ten per cent of all immigrants came from Europe.

Emigration from Ireland continued throughout the 20th century, but the Great Depression, the second World War, and US legislation combined to shift it towards other destinations, particularly England. The Irish-born population in America steadily aged and declined and, as Ireland developed, the nature of the new immigrants changed. In the 1980s they tended to be better educated than their predecessors, but also undocumented.

Each generation had its impact and today about 40 million Americans claim Irish ethnicity. If the way that identity sometimes manifests itself - whether green beer or sequined shamrocks - seems strange to people in Ireland, that is because it is as much a reflection of America as it is of Ireland.

The population of the US today primarily comprises immigrants and their descendants. A mythology has grown up around their origins, based on the idea that once upon a time immigrants were hard working and determined to achieve success. Irish America has its own version of the narrative: from poor, starving Famine migrants facing anti-Catholic discrimination, they and their descendants rose to positions of power, epitomized by the election of John F. Kennedy in 1960.

However, the same mythology depends upon a wilful amnesia that allows people to see recent arrivals as lazy or threatening. In the 19th century many Irish arrived in America impoverished and unskilled, and the society they entered believed them ignorant and dangerous. Their rise up the social ladder involved more than just overcoming stereotypes and seeking opportunity; it also meant enacting prejudice, particularly against African-Americans and other immigrant groups.

While global migration today may take place on an unprecedented scale, we must remember that its causes and discourses have changed little.

Sara Goek is a lecturer in the Department of History at University College Cork. She blogs at saragoek.wordpress.com and tweets @SaraGoek