Guide to moving to Australia 2016

Beautiful beaches are a huge draw - but it’s a big move, so check our guide for practical advice 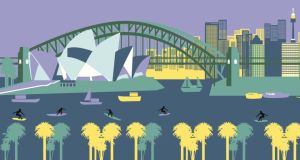 Note: This guide was last updated in 2016. For the 2018 guide, click here.
The golden beaches, clear blue skies and laidback lifestyle are hugely attractive for many who choose to move to Australia. One of the main draws for Irish people in recent years, however, has been the booming economy, which in June 2016 marked 25 years without a recession.
The country is not as popular as it used to be, however. In the 12 months to April 2016, just 6,200 people moved from Ireland to Australia, according the Central Statistics Office. That’s just over a third of the total in 2012, when numbers peaked at 18,200. They also show a dramatic jump in the numbers moving back from Australia to Ireland.
Some of this is due to the scaling down of production in the mining sector, particularly seen in Western Australia, which employed tens of thousands of Irish during the boom. Australia’s east coast tells a different story. The Sydney skyline is crammed with cranes, clear evidence that the construction boom continues in Australia’s New South Wales.
So no matter how attractive the Big Country may be, it is important to do thorough research in advance of such a big move, especially if you are taking a family with you, and preferably have a job lined up.
A study by the Clinton Institute in UCD shows hat mental health has emerged as a problem for Irish communities in Australia. Financial concerns and a lack of preparation were identified as contributory factors, along with the burdens associated with moving country, such as loneliness and isolation.
This guide gives an overview of the main points to consider when planning a move to Australia, with links to official government websites and other useful online resources where you can go for more detailed information.

Visa guide: Introduction to the most popular visa types for Irish workers, from the working holiday visa to options for longer stay, including employer and state sponsorship, permanent residency and citizenship

Finding a place to live: Overview of the property market, short-term accommodation options, average cost of renting and buying a home in each of the main cities, and how to find cheap furniture

Which city? The most popular locations for Irish people, and what they offer in terms of jobs and lifestyle

Finding a job: Introduction to the current economic climate in Australia, examining the jobs market, what skills/occupations are currently in demand and where, how average salaries compare to Ireland in certain industries, and advice on how to jobsearch

Health: Who is entitled to public healthcare, what costs are involved, and health insurance options

Education: How the education system is run by state/territory, third-level options and costs and fees for visa holders, permanent residents and citizens

Costs: How much money you should bring to get set up, the cost of living by city, an introduction to the tax system, and other financial considerations

Q&As with recent arrivals and long-term residents on their experiences living there.