Time for a tea dance: Michael Flatley’s art is turned into pastry

The former ‘Riverdance’ dancer’s paintings – which sell for up to €340,000 – are the inspiration for a new afternoon tea in a Dublin hotel 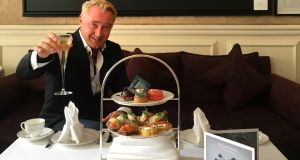 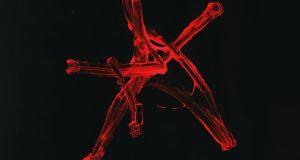 ‘Elvis’ a painting by former dancer Michael Flatley, which is used as inspiration for the Shelbourne hotel’s new afternoon tea

It’s hard to talk to Michael Flatley about cake, because he doesn’t eat it, ever. Not even when Kate McLoughlin, executive pastry chef at The Shelbourne hotel in Dublin, has spent six months creating exquisite pâtisserie inspired by the dancer turned artist’s paintings, six of which currently adorn the hotel’s Lord Mayor’s Lounge.

“I can’t have wheat or dairy. It’s small percentage of the population, but I think it’s growing. I am told everywhere we go now, whether it’s London or New York or Paris, everybody is requesting wheat-free and dairy-free,” the former dancer says.

“I am going to suggest to them that they might do one that’s gluten-free and dairy-free. I think that would be good, and maybe they can consider putting some Blue Mountain coffee on the menu with almond milk, so people that are dairy-free can enjoy that as well,” he says, sounding like a man whose every request is attended to.

We’re in the George Moore suite, chatting in advance of the launch on Tuesday of the Michael Flatley Afternoon Tea at the hotel. Flatley has just flown in from London, having waved his son, Michael junior, off on his first day back at school.

“We just flew in from Portugal last night and spent the last bit of the evening doing homework together and getting ready for this morning,” he says.

He is keen not to offend the kitchen staff at the hotel which he calls “a home from home” and says that although he won’t be able to eat them, he has read up on the four elaborate cakes, works of art themselves, that are the centrepiece of the afternoon tea.

“I hope I won’t upset anyone, but I don’t eat desserts at all. I used to love having ice cream, but can’t have that, and also, my favourite dessert or after meal treat was Welsh rarebit. I used to love that. That was my favourite thing to have, with maybe a glass of Sauternes.”

Flatley’s artworks have rocketed in price since the first one offered for sale at public auction was knocked down for €22,500 at Sheppards in Durrow in December 2014. Irish Times fine art and antiques correspondent Michael Parsons estimated that his first London exhibition in July of last year generated sales of €1 million. But, contrary to popular opinion, not all of the paintings are created with his feet, which might have come as a relief to the team behind the genteel creations at The Shelbourne.

Pastry chef Kate McLoughlin and her team aren’t so averse to taking up a paintbrush. One of their creations for the Michael Flatley afternoon tea is a pretty pink macaron filled with strawberry vanilla cheesecake that takes its inspiration from the painting, Playful. It’s hand-finished with coloured brushstrokes to reflect the pinks, greens, yellows and purples in the painting. They will have decorated around 15,000 of these by the time the themed afternoon tea finishes its run next April.

Michael Flatley is surely not in it for the money, so does he find it hard to send his work out into the world for sale to the highest bidder? “Yes, I do I find that very hard and I’ve been warned off that by all the business people. I don’t deal with the business end myself at all. They’ve all said you can’t get so emotionally attached to a painting. I try to explain to them you can’t not get emotionally attached.

“Painting is like any form of expression – you are putting a bit of yourself into whatever it is you do, whether it’s dance or writing, or creating beautiful pastries. So any time that you let go of that, it’s always going to be difficult.”

And are there any paintings that he couldn’t bear to part with? “Well, Elvis [one of the paintings in the Shelbourne exhibition] ... very difficult for me to let go of that, and we had crazy offers.” Elvis appears on the afternoon tea menu as an indulgent glossy dark chocolate dome, enrobing salted caramel and dark chocolate mousses and raspberry compote. A confection that the singer himself would definitely have approved of.

When it comes to deciding what to sell, Flatley’s wife Niamh gets her say on what might be moved on – even multi-home owners must run out of wall space some time.

“I am blessed, my wife is very supportive and she’s a very bright girl. She advises me and she says, ‘just turn away now while we choose ... these, these are going’.”

The Michael Flatley Afternoon Tea at The Shelbourne Hotel, Dublin 2, is available daily, and costs €49, to include sandwiches, scones and beverages as well as pâtisserie.

Looking for a nifty home-working desk? This Irish designer model could solve your problems
7