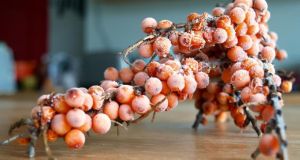 It’s a ridiculously frustrating fruit, a superfood, the trendiest thing in some restaurants since the goat and beetroot salad. And it grows like a weed around our coastal areas. Meet the sea buckthorn berry. Foraging it is a service to the environment and a Vitamin C boost against winter colds. But first, get yourself a set of goggles, a secateurs and a good thick pair of gloves.

That’s what Niamh Ní Cholmain has just handed me on North Bull Island in Dublin Bay. The safety goggles feel like overkill. Then I reach out and try to pick one of the bright orange berries on the thicket of sea buckthorn. There’s a two-inch syringe-sharp thorn to get past. Then the berry explodes with a pop of bright orange juice before it comes off its stem.

There are hundreds of these juice explosions on the plant, as bright orange as tiny pumpkins, clustered along the woody branches like holly berries. The berries hold on tight but have a gossamer thin skin. So the tug you need to free them squishes them to a messy pulp.

“The Greeks fed it to horses to give them a silky coat,” Ní Cholmain, who works as Dublin City Council’s biodiversity facilitator, explains. So Rene Redzepi didn’t invent sea buckthorn. Although the Danish chef did champion it in his Copenhagen Restaurant, Noma, after reading about it in a military survival handbook. Now it’s on Danish supermarket shelves in yoghurts and smoothies. Ní Cholmain is less starstruck by it. “I call a horse of a plant.”

Sea buckthorn arrived through golf course landscapers who planted it to stabilise the dunes and provide a wind break.

“It’s an alien invasive plant and when it got here it said ‘happy days’ and took over. It thrives in poor soil because it fixes nitrogen from the air. It’s got roots that walk under the ground and then pop up like raspberry runners,” she says.

Then it becomes a dense impenetrable thicket that nothing can grow under it. Here on the North Bull Island, the alder marsh, where the city’s rarest butterflies and orchids live, is threatened by this coastal bully boy.

The sea buckthorn loves tough conditions. Cutting it back only encourages it more. At this time of the year the birds gorge on the berries. Birds have been seen falling drunkenly off fences after feasting on the fermented juice. And when they’re eaten by birds, the seeds start new plants which spread further over the island. “We’re challenged by it. We can’t use foliar sprays. We can’t come in and dig it out of the ground and we can’t cut it back during the nesting season.” So the City Council is asking citizen environmentalists to come pick the berries and then hack back the plants to the stem. Then the Council will inject the trunks with glyphosate to kill them off.

Ní Cholmain is heading off to meet a group from Coolmine Therapeutic Community who are going to hack back the buckthorn and I’m left to my own devices. The good news is sea buckthorn berry is packed with Vitamin C. The bad news is it doesn’t taste great. There’s a musty sour tang off the berries which fill the car on the way home. It’s like the smell of Autumn leaves, or old socks, depending on how unromantic you want to get.

You don’t so much pick the berries as cut lengths of berry-covered twigs and bag them. Then the secret is to freeze them. Once frozen, the berries are sweeter (not much sweeter. We’re not talking Jelly Tots here). And they snap neatly off the branch.

After 20 minutes cutting and bagging the twigs I’ve collected about 2 kilos of fruit. Once you’ve picked and frozen your berries you can use them in their raw state or cook with them. I stir them frozen into porridge. They melt quickly and burst turning the porridge cheerful orange.

To make a syrup, I snapped off 500g of frozen berries and brought them to a gentle boil in a saucepan, then strained them through a clean tea towel in a sieve into a bowl, squeezing the last of the pulp to extract 400ml of juice. To 200ml of the juice I added 100g of sugar and stirred it over a low heat for around 10 minutes. I put the syrup in a scalded jar in the fridge.

I tried another, even nicer version, with 100ml of maple syrup added to the remaining 200ml of juice along with a teaspoon of cinnamon for a browner richer syrup. With more sugar and lemon you could easily make sea buckthorn set jelly. And then there’s the honours level cooking: Redzepi’s Noma recipe to turn sea buckthorn into fruit leather. I’ll leave that to the experts.

Mental health: How to mind yourself during the shut-down
9

‘The lockdown might be driving you stir crazy, but some of us are used to it’
10

Older people on isolation: ‘I have plenty of food but not much appetite’
Real news has value SUBSCRIBE