The lesson today? Make your own gin

How about creating a tipple, going to a buffet disco or being sorted for Valentine’s Day? 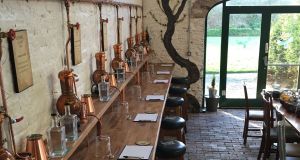 The Gin School at Listoke Distillery in Co Louth: classes last for three hours, cost €95, and can be booked online. A disco brunch is coming to Andrew Rudd’s Medley on Fleet Street East in Dublin 2 (alongside the Westin hotel). 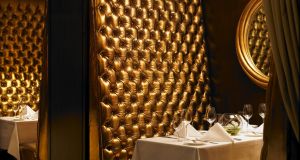 Champagne all the way at the Laurent Perrier tasting dinner in The Saddle Room at the Shelbourne Hotel. 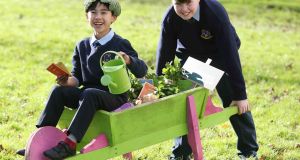 Helping to launch the national Sow & Grow initiative are Ephraim Dean (8) and Aarron Dillon (11) from Our Lady of Good Counsel Boy’s National School in Drimnagh. The GIY and innocent Drinks Sow and Grow project enables school children to grow their own food in the classroom this spring. To register for a free pack, see https://youcompleteme.innocentdrinks.co.uk/sowandgrow/ . Photograph: Leon Farrell

Go to school on a gin

“I’m off to school,” you call tell family and friends as you head to Listoke House near Drogheda, Co Louth, for a day out with a difference.

There are lots of new Irish gins on the market, but Listoke 1777 Gin, being made at a new distillery in the country house’s stable yard, is offering a “Gin School” experience at which participants can take a tour of the distillery, create their own gin, use a miniature copper still, label and seal their bottle to take home with them, and of course sample the product.

The new gin, which sells for €45 a bottle, has been described by drinks consultant Patrick Noir as being “soft and subtle enough to enjoy neat”, as well as having a distinct character that works well in cocktails. Bronagh Conlon, co-founder of the distillery says: “Every good gin has the holy trinity of botanicals – juniper, coriander and angelica root, and Listoke 1777 has a further six.” The unidentified additional botanicals are what give the gin its individual character.

The distillery also has a wood-fired brick oven that will be turning out school lunches in the form of freshly made pizzas. The classes last for three hours, cost €95, and can be booked online. Each session is limited to 12 participants and, as the classes are selling well, it is best to book in advance. Gift vouchers are available. See listokedistillery.ie

It’s all go at Medley, Andrew Rudd’s party and event space and bistro on Fleet Street East in Dublin 2 (alongside the Westin hotel). A disco buffet brunch launches on Sunday, February 19th, with a introductory price of €20 for an all-you-can-eat spread, and beverages including coffee, tea, juices and smoothies.

A DJ will play between2pm and 5pm, and dancing is encouraged. It will run every Sunday, with new head chef Vincent Blake keeping the menu fresh and interesting. Tickets should be prebooked by emailing chris@medley.ie.

Prior to the launch of the disco brunch series, Medley is staging an events and wedding showcase on Sunday and Monday, February 5th and 6th, and a Valentine’s night dinner on February 14th. See medley.ie

After last year’s very-out-there flavoured coffees – apple strudel and linzer torte – Nespresso has got back on track with its latest Limited Edition launch. For the first time, the company is offering a coffee than has been aged over several years. SelectionVintage 2014 was harvested three years ago, and then aged in constantly regulated conditions.

Continuing the wine and coffee parallels, the company is selling Riedel crystal glasses which have been designed to allow the coffee full expression. They cost €37 a pair, in a gift box, and the capsules are €5 for 10. The coffee is described as having “an elegant flavour with soft fruit and woody notes”, and it is best served as an espresso.

V-day approaches, and if you’d like to impress someone, and yet avoid the sea of tables for two on the night of the 14th, then the Champagne Laurent Perrier tasting dinner in the Saddle Room at the Shelbourne hotel in Dublin next Wednesday, February 8th, might fit the bill.

Nicole Snozzi, sommelier and brand ambassador, will introduce a five-course menu created by executive head chef Gary Hughes to complement the Champagnes, a different one of which will be served with each course, as well as at a pre-dinner reception.

Jerusalem artichoke soup, scallops, turbot, guinea fowl and pannacotta feature on the menu, which is also studded with luxury ingredients such as truffle, oysters, caviar and, of course, Champagne foam. Tickets are €96 per person and reservations are being taken on 01-6634500.

GIY has launched its fifth annual Sow & Grow initiative and this year the campaign expects to involve 195,000 school children across Ireland and the UK. Backed by the Innocent brand, the programme aims to teach children about where their food comes from, and get them growing vegetables. Schools that sign up at innocentsowandgrow.com will receive grow packs, a guide to growing vegetables, and a wall chart to plot their progress.

Cottage luxury in every inch of suburban hideaway for €995k
3

Airborne coronavirus: What you should do now to help yourself stay safe
9