‘What, no meat?’ is one sentiment you won’t hear if you serve these substantial, main course salads 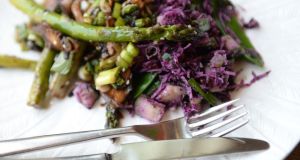 Doesn’t really count as dinner. Sure it’s nothing but rabbit food. Or, my personal favourite, what’s for the main course then?

These are just some of the comments that can come your way at mealtimes when you decide to put a salad (or salads) centre stage. Yes, just salad – with no meat or fish jostling for position on the plate. My all-too-traditional grandfather would be turning in his grave at the very notion. “No meat?”

There’s no doubt that until relatively recently, salads got a pretty poor rap. I can’t be alone in remembering listless, tasteless lettuce and anaemic, sun-starved tomatoes, maybe with a bit of cucumber thrown in? Until the late 1990s in Ireland, salads were something most of us ate unwillingly, if at all. Even then, it was often a token gesture, because we thought, vaguely, that it might be good for us.

But no food will thrive on being worthy alone. It’s like that “nice” bloke or girl your parents wanted you to date when you were younger. If he/she had your parents’ approval, you would go out of your way not to date them. Salads can be the same, hovering on the edges of your circle but never enjoying the popularity they really deserve.

I have long been a fan of salads, both warm and cold. If you can park your prejudice – and often, it’s a fear of not getting it right – there can be a freewheeling ease about salads that encourages you to experiment. And in my book, anything that makes you more willing to give cooking a go has to be a good thing.

Luckily, salads are now a central feature of most restaurant menus, and as part of my “Year of Healthy Eating”, I’ve yet again been using family and friends as guinea pigs, presenting them with all kinds of salads and then hovering while they eat, waiting to see what they think. No pressure there then, as the Teenager would say.

The two I present here passed the test (phew). Both are robust, tasty and bursting with nutrients. Cabbage is just ridiculously good for you, and here it is combined with black rice and a sharp, zingy dressing with mint and ginger.

An Asian influence is at work in the second salad – in a tamari, miso and sesame dressing which is soaked up by the portobello mushrooms and slender spears of roasted asparagus. If you must have meat, this salad is sensational with a simple roast chicken or carpaccio of beef.