Select: Geographical lunches and the stories behind the names

Where do Buffalo Wings, Peking Duck and Baked Alaska come from? 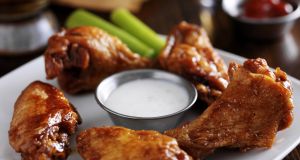 At a recent reunion of old friends, the craic was still in full flow in the wee hours. We’d all gone back to a friend’s house, to listen to Caribou and Chris de Burgh (ironically, you understand).

A welcome shower of assorted crisp packets soon descended upon the kitchen table. The Buffalo flavour crisps sparked a conversation about why we were eating crisps that were emulating the taste of an endangered North American beast; it seemed disrespectful.

And why is the beloved hangover cure of sticky, orange chicken called Buffalo Wings anyway? As reality/pop star Jessica Simpson once contemplated “I didn’t even know buffaloes had wings.”

“Buffalo, New York!” I exclaimed through a mouthful of crisps. Of course! A quick online search confirmed the story behind the wings, which hasn’t travelled as far as the actual dish itself. It’s thought that Teressa Bellissimo, proprietor of the Anchor Bar in Buffalo, New York, invented the dish in the mid-1960s when she received an order of chicken wings rather than her usual order of chicken necks, which she used when cooking the base of her spaghetti sauce.

She deep-fried the wings, unbreaded, and served them with the spicy Frank’s RedHot sauce mixed with butter, a blue cheese dip and sticks of celery on the side to keep things cool.

By the 1970s, the dish had spread throughout the state, then asross the US, and soon after, the rest of the world.

It got me thinking about the forgotten stories behind other dishes or ingredients linked to places. I, for one, don’t think of Philadelphia Cheese as coming from the same place as Rocky Balbao, but it does. It can be traced back to the ingenuity of Philadelphia cheesemakers in the early 1800s, more than 100 years before the multinational food company Kraft bought the rights to the name.

California rolling Look into the origins of the California roll and you’ll discover conflicting claims from two chefs. The invention of the California roll is commonly attributed to Ichiro Mashita, said to have introduced the “inside out” sushi roll in his LA restaurant, Little Tokyo, in the 1960s. He struggled to find fresh toro, a fatty tuna, in Los Angeles, and decided to instead use the fatty Californian avocado instead. It’s been said that Mashita was the first chef to roll the sushi inside out, a method now known as uramaki, because US sushi enthusiasts preferred to have the nori on the inside.

An alternative claim to the uramaki style is attributed to Hidekazu Tojo, who has served sushi this way in his Vancouver restaurant since the 1970s. Tojo has said that many of his customers came from Los Angeles, hence the name California roll.

I think the former claim is more likely, because of the location of the restaurant as well as the provenance of the key ingredient; the avocado.

There are few geographically named dishes with as long a lineage as Peking Duck, which featured on imperial court menus in Beijing as early as the 14th century. What makes this roast duck distinctive is its thin, crispy skin, acquired by pumping air beneath the skin to separate it from the fat of the body, before soaking it in water and hanging it up to dry while marinating in a sticky syrup. The final steps are to roast the duck, and serve shredded and wrapped in pancakes with the crispy skin on the side. Delish.

There are some dishes that retain the name of the place they were invented in, such as Eccles Cakes and Dijon mustard, but that are widely produced outside (and sometimes very far away) from their home town. In the EU, to discourage this kind of culinary borrowing, Protected Geographical Indication status has been given to a number of delicacies, such as Champagne, Cornish Clotted Cream, Abroath Smokies and Stilton Cheese, tying traditional food and drink to their geographical origins.

For example, a sparkling wine from Italy can be a Prosecco, but never a Champagne. The Waterford Blaa is one of five Irish products protected under this EU law. This soft, chewy, floured roll is made in Waterford and Kilkenny today and its suitability as a vessel for bacon and tomato relish is undisputable.

Geographically-named Desserts are prolific, from the Battenberg Cake to Turkish Delights to the Bakewell Tart. Baked Alaska offers a political insight in its backstory, and is linked to Charles Ranhofer who is considered to be one of the world’s first celebrity chefs. French-born , Ranhofer moved to New York in the 1850s, working his way up to the position of Head Chef at Delmonico’s in the 1960s. He had a flair for PR, and often named his dishes at Delmonico’s after his famous friends or the events of the day.

Though he can’t be credited for inventing the dish Baked Alaska (a feat of food innovation that sees a frozen ice-cream cake enveloped in crispy meringue, often served ablaze in flames), it is fair to say that he popularised it. In 1867, the United States purchased Alaska from Russia for $7.2m.

Ranhofer seized the opportunity to commemorate the occasion by putting the omlette surprise, as it was commonly known then, on his menu, renaming it as Baked Alaska.