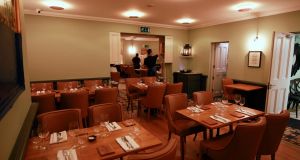 Mr Fox restaurant on Dublin’s Parnell Square is where The Hot Stove used to be. Photograph: Nick Bradshaw 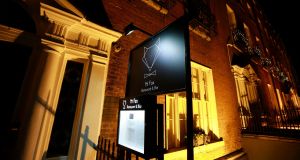 My son spotted her first. She was picking her way along the top of a neighbour’s fence in broad daylight, her face fixing us through the window with a steady gaze.

Then she disappeared into the thick cover of ivy with just a shiver of leaves to mark her passage through the tangle.

I love city foxes, their stillness when they stand in a street light before fleeing into the shadows. A vixen in my old allotment regularly used ivy for cover.

With a rustle of waxy leaves, her triangular face would stare out before melting into green like a glove puppet pulled back through the gap in the baize.

It’s that angular face that the people behind Mr Fox in Parnell Square have chosen as their logo.

A version of it is hanging on the wall in the bar part of the restaurant, a string picture of a fox pulled in taut lines on a chalkboard background – finished off with a dapper dicky bow. Because Mr Fox is an elegant gent.

The place used to be The Hot Stove, where chef Joy Beattie opened an excellent basement restaurant in 2013, built around the original stove in the room which used to be the kitchen of the big house above us.

Down shots of his plates have been stacking up on social media faster than advent calendars in a January sales bin.

But then no one perfects a house “Walnut Whip” (more of which later) without expecting some traffic on Twitter for their trouble.

The rooms are little changed since Beattie was in the kitchen, although the linen tablecloths have gone to the great laundry in the sky.

So, everything has a caramel hue from the biscuity-bare bricks to the comfy, padded chairs. It’s all smart, warm, welcoming and alarmingly empty on a Friday around lunchtime.

Then a friend arrives who’s meeting her accountant. The last lunch they had was also in a virtually empty restaurant.

She worries her accountant will think her jinxed with a peculiar talent for picking the city’s unpopular spots. But Mr Fox fills up pleasantly as lunch goes on. They do things later on the northside, apparently.

And boy is Mr Fox fantastic, especially those dishes that are the support acts. There’s a house sourdough with proper tang and elastic freshness.

Teamed with cep butter (the nicer of the two options alongside a Parmesan cream) it’s a calling card to let us know we’re in very good hands.

There are leeks (suspiciously scallion-like today but that’s okay) tempura-ed in a crisp light batter, white roots and all. Alongside is a puddle of smoked eel egg mayonnaise, a brilliant way to slide the scary concept of eel into plates as an easy crowdpleaser.

The smoked flavour winds its way along the bottom like a bonfire wisp in fish form. My deer tartare is a round of forkable small pieces of venison dressed with mustard and jewelled with bursts of sweet tartness in the shape of red currants.

The whole dish is scattered with a leaf fall of orange Jerusalem artichoke crisps and a few tiny triangles of pickled Jerusalems are tucked underneath like a secret flourish.

There is partridge with a soupy mushroomy pearl barley risotto and wedges of pear and pencil-thin parsnips for bite and sweetness.

A blowtorched piece of cod, barely beyond sashimi stage, and balanced on a corn succotash is the best of pairings: down home cooking with chefs’ smarts finesse.

The sweet warmth of the corn is laced with a red pepper oil and microscopic shards of chorizo, each of the three elements giving edges to the other like brushstrokes on a page.

And that “Walnut Whip”?

Well, it’s a topsy-turvy version of the blue wrapper one. Instead of the raw (and typically stale) walnut on the top – which was always the duffest bit – they’ve made it the star. This walnut is sugar roasted.

Underneath is foamy house marshmallow and nice chocolate but, hang on, there’s a biscuity spongy bit at the bottom – instead of that thicker disk of chocolate I used to lick the last of the marshmallow from (I know. Way too much information).

This interloper layer is fine but it says Tunnock’s Tea Cake to me, lads, and to any other sweet shop purist.

The chocolate bouchon is much more grown-up, all masterful textures and temperatures, a small excellent tower of warm chocolate sponge but with an added wedge of housemade Aero bar, malt custard and ice cream.

Dublin’s Parnell Square has been waiting for its moment for decades. My dad, who’s here with me today, went to school in Coláiste Mhuire at the top of the square, cycling up and down the hill outside twice a day after pedalling home for his lunch.

His old school is going to become the new City Library as part of a “cultural quarter” plan for this district. It was all announced almost four years ago, so no one is holding their breath.

Even if the cultural quarter remains a pipe dream, Mr Fox is a rare beast: style and proper substance. In spades.

Lunch for two with sparkling water, one glass of wine and two coffees came to €97.80