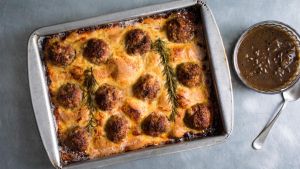 Step 2 Prepare the batter: add the eggs, milk, beer and mustard to a large bowl, and whisk vigorously until foamy – about one minute. Add the flour and salt to a separate large bowl, make a well in the centre, and pour the egg mixture into the well, in about four increments, whisking lightly each time, until the flour is just incorporated. Whisk until there are no lumps and the ingredients are just combined, taking care not to overwork the batter. Set aside for at least 30 minutes, or while you continue with the next step.

Step 3 Prepare the gravy: add the oil, butter, onions, rosemary and vinegar to a 23cm-by-33cm baking tin. Bake, stirring a couple of times during cooking, until the onions are thoroughly collapsed and browned – about 20 minutes. Whisk together the flour, stock and beer in a bowl until smooth. Add half a teaspoon of salt and a good grind of pepper, then pour the flour mixture into the baking dish. Return to the oven and bake, stirring twice throughout, until the gravy is thick and rich – 20 to 25 minutes. Discard the rosemary sprigs and keep warm.

Step 4 While the gravy is cooking, prepare the meatballs: soak the bread in the milk in a small bowl and set aside until the liquid is absorbed – 10 minutes. Use your hands or a fork to break apart the bread into a lumpy mash. In a large bowl, mix together the pork mince, pancetta, onion, parsley, garlic and lemon zest with a teaspoon of salt and a generous amount of pepper. Add the bread and use your hands to knead the mixture until it is very well mixed. Shape into 12 large meatballs.

Step 5 Spread two tablespoons of sunflower oil across the bottom of a large roasting tin, about 23cm by 33cm in size. Add the meatballs and bake for 10 minutes, or until some of their liquid has been released. Transfer the meatballs to a baking tray lined with paper towels, to absorb any excess moisture. Pour the liquid released from the meatballs in the roasting pan directly into the gravy, and then wipe the roasting pan dry.

Step 6 Add the remaining four tablespoons of sunflower oil to the meatball roasting pan and return to the oven until very hot and beginning to smoke – about 10 minutes. Working as quickly as possible, pour the batter into the pan (it should bubble around the edges) and then add the meatballs and two sprigs of rosemary. Return to the oven immediately and bake for 15 minutes. Reduce the temperature to 210 Celsius (don’t open the oven!) and bake for 30 minutes more, or until golden and well risen. (If you want, you can sneak the gravy into the oven to rewarm during the last five minutes of baking.) Serve immediately, with the gravy alongside. – New York Times