Meat is madness: why it leads to global warming and obesity 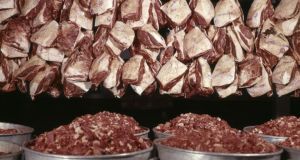 Ireland has a serious obesity problem – one that by 2030 will have spiralled into a full-blown public-health emergency. World Health Organisation projections show that, on current trends, half of Irish adults will be clinically obese within 15 years.

Ireland also finds itself among the very worst in the league table of greenhouse-gas emissions: we are 45 per cent above the EU average in per-capita emissions. And, despite binding international commitments to rapidly reduce this pollution, the Environment Protection Agency confirms that our emissions, like our waistlines, are continuing to expand.

At first glance there might seem little to connect greenhouse-gas emissions with an obesity epidemic, but they can also be seen as two sides of a dysfunctional coin. This is the conclusion of a new study at Oxford University.

The current global food production and marketing system is generating a glut of cheap processed meats that are fuelling climate change while feeding a pandemic of diet-related ill health that is costing between €600 billion and €900 billion a year in healthcare and related costs.

If people in developed countries such as Ireland and the US simply ate no more than the recommended levels of meat more than five million premature deaths could be avoided by 2050, according to the Oxford researchers. They further calculate that a worldwide switch to a vegetarian diet would save more than seven million lives.

These would be welcome reductions in ill health, hospitalisation and premature death from heart disease, cancers and diabetes. And the carbon dividend of such a dietary transformation woudl be no less significant.

Researchers calculate that reining in our meat consumption to the recommended levels would cut agricultural emissions of greenhouse gases by a hefty 29 per cent. A global shift to a vegetarian diet would slash those emissions by 63 per cent, ease a host of chronic ecological problems – from deforestation to desertification, eutrophication and water stress – and free the land available to grow food directly for humans, so reducing hunger among the poor.

Globally, the production of just meat and dairy products generates 14.5 per cent of all emissions – more than the output of every car, bus, lorry, train and ship in the world, combined. The influential UK think tank Chatham House –formally the Royal Institute of International Affairs – in 2014 found low public awareness of the true costs of dietary choices. But “consumers with a higher level of awareness were more likely to indicate willingness to reduce their meat and dairy consumption for climate objectives”.

Closing what those researchers call the awareness gap is a vital first step. They note the “striking paucity of efforts” to rein in consumption. They also suggest that governments and environmental groups have been “reluctant to pursue policies or campaigns to shift consumer behaviour”.

The reason seems to be fear of backlash, principally from powerful interest groups, and in few countries is this more apparent than Ireland, where food policy is shaped primarily by the agri-industrial lobby.

Left unchecked, global meat and dairy consumption will by 2050 have risen by 76 per cent compared with today, according to the UN’s Food and Agriculture Organisation – a lethal double whammy for human health and the biosphere.

It’s hard but not impossible to change human behaviour. A separate study by researchers at Reading and Oxford universities recommends taxing the carbon footprint of foods such as beef and dairy products to reflect their true health and environmental costs. But they warn of the risk of pushing the public towards sweeter, equally unhealthy dietary options.

Their solution: a carbon-dioxide tax of about €4 a tonne on high-emission foods, combined with a 20 per cent sales tax on sugary drinks. They estimate that this intervention alone would reduce the UK’s greenhouse-gas output by 18.5 million tonnes and avoid 1,250 premature deaths a year.

The practical impact of such a tax would be to significantly push up the price of red meat, including beef and lamb, which could lead to a 20 per cent drop in consumption.

Shortly after this study was published the UK government introduced a levy on sugary drinks. The Irish industry, backed by Minister for Finance Michael Noonan, has been quick to decry such a move here. Taxes do work. A 10 per cent tax in Mexico on sugary drinks saw consumption fall by 12 per cent within a year.

The Irish agribusiness lobby is, unsurprisingly, fiercely opposed to levies on foods with high carbon footprints. The national beef herd comprises more than five million animals, with another 1.2 million dairy cows. The dairy sector, following the euphoria of last year’s lifting of quotas, is now in crisis, as milk prices have slumped to barely the cost of production.

While dairy farmers struggle the beef sector remains on life support, surviving thanks to huge EU transfers. Prof Alan Matthews of Trinity College Dublin quoted Teagasc figures last year confirming that, were it not for EU subsidies of about €400 a hectare, beef farming “could not continue”. If, he explained, “you were to add in the additional costs of greenhouse gases, those net margins would be even more negative”.

As a way of making food, beef production is strikingly inefficient. “Beef has one of the lowest feed-to-food conversion efficiencies of commonly consumed foods. Only 1 per cent of gross cattle-feed energy and 4 per cent of ingested protein are converted to human-edible calories and protein.” As a result beef uses more land and freshwater, and emits more greenhouse gases, per unit of protein than other commonly consumed food, according to the 2016 Global Food Policy Report.

Defence of our high-emission national agricultural policy is often based on the argument that, as a “food island”, we are a special case. This claim is severely dented by Food and Agriculture Organisation data for 2011, which shows that Ireland is in fact a net importer of food calories – shockingly, we import food calories for 1.4 million people more than we export for. Rather than Ireland feeding the world, we’re not even feeding ourselves, according to research to be presented later this month at NUI Galway by Dr Colin Doyle.

Shifting away from excessively meat- based diets will benefit human health while reducing hunger among the poor, easing animal-welfare concerns and offering farmers a sustainable future.

High-tech alternatives, such as the approach of Beyond Meat, the US food company backed by Bill Gates, are fast emerging, using plant-based ingredients to closely mimic the taste, texture and smells that make meat so alluring, while trimming the health effects and global environmental havoc that our ancient carnal predilections are now wreaking.