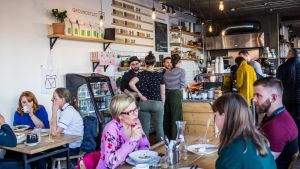 Hopes are not high for Ground State. It looks too hip to be delicious. But I’m persisting in my attempts to be underwhelmed. This is a third visit. On the first it was closed, then later the door was open but it was about to close. Now finally it’s the middle of a Saturday and we’re looking for somewhere for a coffee and maybe food. So Ground State is up for a visit.

They’re busy with groups of young well-dressed tourists who, at a guess, have just ticked the box on a visit to the Guinness Storehouse nearby. It’s a cafe and yoga studio. Yes we’re in that Venn diagram where slate-grey yoga mats are rolled up on shelves outside the loos. It’s on the corner of Echlin Street and James Street. Through its gleaming plate-glass windows there’s a lovely view of the redbrick hall beside St James’s Church, which has an 800-year history as the starting point for Camino walkers. Some serious pilgrims still get their Camino passports from the church sacristy on Echlin Street before heading to the airport for a flight to Spain.

Inside, Ground State is all repurposed wooden tables and steel-legged chairs that scrape noisily over the bare concrete floors. I’m the first to arrive so there’s a chance to read the menu all the way down to the end. That’s where the words McNally Farm are a welcome sight, like a beloved friend in a room of strangers.

A lot of work goes into sourcing vegetables from one of the country’s best organic growers. You have to persuade them to supply you and then you have to trek down to the stall in Temple Bar market to pick up the produce. It’s a weekly pilgrimage undertaken only by the devout. But if you believe that strongly in your vegetables, you’re bound to do them justice on the plate.

And that’s where the joy sparks. To my delight, Ground State is terrific. Their craft is summed up in the serving of kimchi that comes with a croque madame. A crispy fried egg sits on top of Bread Nation bread with thick-cut ham that tastes like it came from a pantry in the 1950s. There’s a light Parmesan and cheddar cream, some micro tarragon and crescents of pickled red onion for sweet kicks. But the kimchi is the star, slippery shards of fermented cabbage with just enough chilli sting to play nice with the lactic sourness rather than beat it to a pulp.

There’s French toast made with a citrus crème anglaise, which could take its place happily on the dessert option of a much swankier place. There’s snow-white labneh (thick strained yogurt) here too and berries bleeding their juices through all the creaminess. There’s a “weekend scramble”, a phrase that may well come to characterise the rush for seats here shortly. It’s softly scrambled eggs on more of that sourdough, toasted, with red onion jam, curly green kale and mushrooms cooked with butter and tarragon, which is, hands down, the best thing to do with mushrooms.

I have the weekend vegan toast, which sounds purgatorial but is delicious – squidgy cubes of sweet potato roasted with miso to take the top note off their sweetness on a malted sourdough toast that has been drizzled with excellent olive oil, the whole lot topped with kale and McNally’s purple sprouting broccoli and toasted pumpkin seeds for crunch. It’s my kind of vegan, no fake ultra processed let’s-pretend-it’s-bacon nonsense, just the best that plants have to offer cooked cleverly.

Having repeatedly failed to eat here, the success of the first visit leads rapidly to a second, back the next day for a Sunday brunch to try the la resaca – touted as a hangover bowl, it can be enjoyed without one. The kale is the star again with refried beans, a fried egg and a salsa verde, with all the flavours, paprika roast potatoes and more of that great pickled red onion.

My “green sushi bowl” is the only dish that hasn’t worked. It’s just a bit bland, as a bowl of sushi rise with lentils can be. A heavier hand on the ginger and roasted seaweed would lift it back up to the better-than-good notch where the rest of the dishes live.

We try a couple of desserts, which are vehemently date-based and not a reason to rush back, but there’s a cruffin (muffin and croissant mash up) with coconut caramel that looks worth a try.

So Ground State has gone from a write-off to a gushing write-up and a regular haunt. The last time I loved a cafe this much it was when Laura Caulwell was cooking in Storyboard in nearby Islandbridge. So walk a bit farther down James’s Street, where the city centre feel begins to run out and the inner city begins. The tourists have already discovered it. Now it’s time for Dubliners to get in on the act.

Brunch for four, with six teas and coffees, came to €69