Give Me Five: Rhubarb and fennel salad

In this salad, the rhubarb is interesting raw and sliced paper-thin, but it is better cut into small pieces and roasted briefly 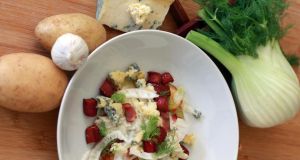 Planting rhubarb is a job for optimists. On a drizzly winter day I dug a hole and put what looked like a flaky piece of blackened root in the ground. It felt more like giving a dead thing a decent burial than any kind of hope for food to come. But then something magical happened. The nubbly thing started to sprout a bright-green, curled-up leaf that unfurled itself like a sea fern.

My rhubarb had a challenging start. It was quickly crowded out by a strawberry bed with ambitions. So I dug it up, shifted it and promptly forgot where it was. But then , in spring,I parted the grass that had grown up around it to find those elephant ear leaves and the deepest purple stems beneath. It’s a champagne rhubarb, a variety that is pinker than its green-tinged cousin. And it’s so mouth-puckeringly delicious I could gnaw on the fibrous stems for a snack. Or better still, dip a stalk in sugar and snap off juicy, crunchy mouthfuls like I did as a child.

After the chilly spring, everything in my allotment is late this year. The only harvest so far has been globe artichokes (which everyone except me refuses to eat) and the pink champagne rhubarb. I’d like to eat this rhubarb in as raw a state as possible. The baby-food mush of stewed fruit seems like too sad an end for such a battler.

The best cookery demo I ever saw was French chef Michel Bras mandolining vegetables into a beautiful plate of colour and flavour. One of them was broccoli; not the florets but the stem, the bit we usually throw in the bin. He ran the stalk down a lethally sharp stainless-steel blade, and it curled like beautiful green wood parings.

I was reminded of it recently when I ordered a fennel dish in a London restaurant. The city that gave us Fergus Henderson’s nose-to-tail eating has embraced a leaf-to-root ethos, endeavouring to use the parts of vegetables that were typically thrown in a stock pot or wheelie bin. The fronds and stalks of the fennel bulb were all on my plate.

Later, I found a fat fennel bulb in the market and I had a partner for the rhubarb. But before we get too carried away with the leaf-to-root school of eating, it’s worth noting that rhubarb leaves are poisonous. So bin them.

In this salad, the rhubarb is interesting raw and sliced paper-thin, but it is better cut into small pieces and roasted briefly in the oven to soften its sour edge. Crisping thinly sliced potatoes and garlic in the oven gives a salty crunch to the other, tangier flavours.

Heat your oven to 160 degrees. If you’re using new potatoes, you can give them a scrub and leave the skins on; otherwise peel the potatoes and slice them as thinly as you can. A mandoline is really useful, but a finger guard is essential to avoid putting an actual piece of yourself into the dish.

Slice the garlic paper-thin, and massage the oil into the potato and garlic slices. Arrange them on some baking sheets with slices of garlic on top of the potatoes.

Give them a final drizzle of oil and bake them in the oven for up to 20 minutes, until they have turned brown. The thinnest ones will crisp up completely. Thicker ones will still have a soft potato bite.

While the potatoes are cooking, chop your rhubarb into half-inch-long chunks and toss in a bowl with the syrup or honey and a good seasoning of salt and black pepper. Spread the chunks over a baking tray and roast in the oven for 10-15 minutes until they have just started to soften around the edges.

As the potatoes and rhubarb cook, thinly slice your fennel. Rinse and use the fronds and stems, slicing them into thin rounds.

You can mix all the ingredients together in a large bowl or plate it up with the potatoes at the bottom, topped with a generous clump of fennel, several rhubarb chunks and similar-sized chunks of Cashel Blue. Dot the final dish with those feathery fennel fronds. Tweezers optional.