Anyone for a strawberry milkshake beer?

Beerista: A round-up of the latest new Irish craft beer releases for spring 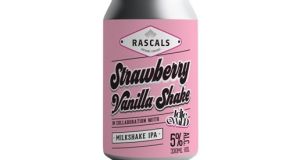 The milkshake beer is one of the latest trends to hit craft brewing. Originating in the United States it’s basically a twist on the hoppy pale ale.

Lactose is added during the brewing for a smooth and milky body, often there’ll be some fruity element and it’ll usually pour quite hazy.

Irish brewery Rascals’ Strawberry Vanilla Shake IPA was a hit at the Alltech beer festival in February and this month it will be available in cans.

If you fancy trying it on draught, Rascals are holding a Holy Thursday tap takeover event called The Last Sip at 57 the Headline in Dublin where they’ll be serving their Strawberry Vanilla Shake IPA among a range of other offerings, including their core beers, a few experimentals and a new Blood Orange sour.

Among a few other new spring releases to look out for over the month is Black Donkey’s TKO. This is the Roscommon brewery’s first foray into the IPA style.

With plenty of pine and citrus hops, it’s a traditional US-style IPA and is described by brewer Richard Siberry as “a trip back to the American IPAs of the early 90s which kick-started the craft beer movement”.

Dungarvan’s spring beer is Magic Road Rye IPA, called after a stretch of road approaching Mahon Falls. This is a full-flavoured beer at 6.3 per cent with an earthy rye backbone paired with big citrus and spicy hops for a good, solid bitterness. Hexed by Galway Bay is another big beer, this is a double IPA at 8.5 per cent with plenty of fruity New World hops.

Wayfarer, a limited edition brew by 8 Degrees, is a sour IPA with hints of lemon, mango and gooseberry. It’s light at 4 per cent, refreshing and with a mild tang – so it’s approachable, as sour beers go.

24 hours in Bundoran: ‘The town is mental. No one expected it to be so busy’
7 Tesla wants an electric Golf rival
8