Donal Skehan: the best of east and west make Turkish food a delight 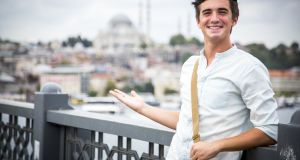 “Istanbul’s street food scene is thriving and was one of my favourite aspects of our trip. It was difficult to resist dishes like lahmacun, a flat bread topped with minced meat.”

Late last summer I found myself squeezed on a bus with a camera crew, hurtling across Istanbul’s Bosphorus Bridge, exactly where east meets west. This monstrous suspension bridge spans the Bosphorus strait connecting Europe to Asia.

My only previous experience of Turkey had been two childhood holidays on its turquoise coast in the south with its spectacular crystal clear coastlines and a string of sleepy villages between Göcek and Fethiye.

Istanbul, however, was different; an instant assault on the senses, the scent of spice in the air, the bustle of a big, hot city, home to more than 14 million people and the perfect place to learn about Turkey’s vibrant food culture.

Straddling two continents and with an amazingly complex history which involves the Romans, the Venetians, the Persians and the Ottomans, it’s no surprise Istanbul’s food scene is both traditional and diverse.

My first stop was Cibalikapi Balikcisi for a traditional Turkish breakfast, a ritual I had heard much about but never experienced. Turkish breakfasts are a leisurely affair and are often served not just in the morning but all day long. 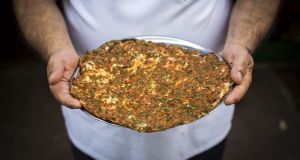 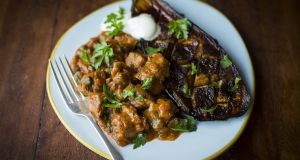 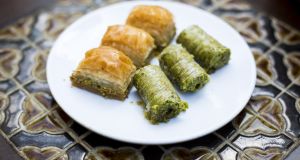 They vary in dishes, but ours consisted of a table heaving under the weight of about 20 little plates of food, including scrambled eggs with sausage, onions and tomatoes, pickled sweet black walnuts in syrup, soft clotted cream with honey, and poached eggs spiced with chilli and paprika sitting in a well of yoghurt, as well as fresh vegetables, herbs and cheese.

It was an incredible feast, and one that the locals take very seriously – an absolute must-try if you visit.

Istanbul’s street food scene is thriving and was one of my favourite aspects of our trip. It was difficult to resist dishes such as lahmacun, a flat bread topped with minced meat, or tender kebab meat with sweet onions and peppers stuffed into a flatbread.

For the slightly more adventurous, lamb’s head, cooked in a tandoor oven until its meat was meltingly tender, expertly removed and seasoned with oregano and chilli, was a delicacy.

Or kokoreç, spiced lamb’s intestines skewered and cooked on a spit until charred and crisp – salty, delicious and a popular late night treat.

Wild, weird and wonderful. Aspects of uniquely Turkish cuisine which you simply have to throw yourself into. The recipes I share with you this week are just a flavour of what this captivating city has to offer.

Follow Donal, a 10-part travel and food series airs on RTÉ One, Tuesday nights at 8.30pm.

Coronavirus: ‘Like my anxiety, my survivalist mentality come and goes’
6

Leaving Cert: ‘It feels aimless. I don’t know what the story is’
7

From eating healthily to staying warm, how to treat Covid-19 in the home
9