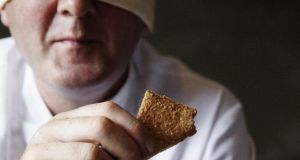 The chef Derek Creagh, Harry’s Bar and Restaurant It was a sunny August day when we arrived at Harry’s in Bridgend, Donegal, for the interview, and the newly formed working duo of chef Derek Creagh and owner/manager Donal Doherty were only getting into their stride. Harry’s Shack had just opened at Portstewart Strand, 60km away, and the two chaps were like Plastic Man and Stretch Armstrong trying keep both restaurants ticking over in the face of massive demand.

Doherty persuaded fellow Donegal man Creagh to come home from where he was working in England, with wife and children, and take on not only the kitchens at Harry’s, but also his “Made in Inishowen” philosophy of locally sourcing sustainable ingredients.

Creagh brings to Harry’s and Harry’s Shack a wealth of experience gained in big kitchens such as Heston Blumenthal’s Fat Duck. And, since August, the sudden expansion has been carried off brilliantly, with rave reviews (including Catherine Cleary’s in this newspaper) and two Georgina Campbell Awards, for best newcomer (the Shack) and best chef for Creagh.

Blind tasting (A bit tense around the shoulders, but with a huge, playful and perhaps even hungry, grin, Creagh digs in.) Guinness flavoured crisps. “Mmm, very nice. That’s a good crisp. Nice malty finish. Very good. I like potatoes.”

I ask him if spuds are as much a creative ball and chain for him as they are for many “modern” Irish chefs. “You know, getting chips right is so hard. You really need to cook them to order. At Heston’s we had time to perfect, and such volume. It’s tougher here of course. And a shame as there are so many flavours in potatoes. People expect to see them yet something more precious might get more time taken over it. I have a very high regard for mash, for example. Big, yellow, buttery Navans make great mash. Stonewell Irish Craft cider (Massive grin.) “Ahhhh . . . might have to try that again.” He does.

“This is such a nice product, great at the end of a hard day – so light and fresh and apple-y with elderflower notes. I like it at this temperature, not over ice. Mmmm.” He has some more.

Pontack sauce by The Wild Irish. “I like that. Fresh, blackcurranty, very nice.”

“I have a blackcurrant and elderflower mess it would work well with. Or perhaps with something light and savoury in an emulsion with rapeseed oil. Maybe fish . . .”

White turnip soup with Kearney blue cheese and lovage. (His own dish.)

“There’s loads of white turnip at the moment. I’ve been pickling them with seaweed. The Kearney blue has a real saltiness I like and I love lovage. So underused. Soup needs a bit more acidity though. I’ll have to work on that.”

I ask him if he’s ever completely happy with a dish.

“Nope. I never think: there, that dish is done. It’s fantastic at this stage of my career to be able to get so excited about food again. It’s very rewarding getting people to move away from their usual fish and chips, to try and enjoy new things.”