Battle of the witbiers: which is the Belgian original?

Both of these beers claim to be the original Belgian witbier – so is there much difference? 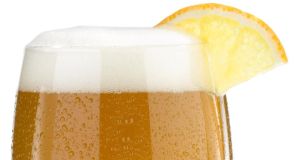 Closing your eyes is a good way to pay attention to what you’re tasting. Without the visuals, your focus suddenly sharpens on everything else: the aroma, the mouthfeel, the flavours.

It’s also an interesting way – if you’re in the mood – to compare versions of a style or to closely pick apart the differences between them. Which is exactly what I wanted to do with two types of Belgian witbier, both claiming to be the “original”.

Hoegaarden – along with Erdinger – was among the first imported alternatives to the mainstream offerings to hit Irish pubs in the early Noughties. (Remember those massive, hexagonal glasses with slices of orange perched at the side?) This Belgian witbier style – meaning white ale – was once widespread in Belgium but died out around 1955. It was revived 10 years later by the brewer Pierre Celis, who launched Hoegaarden. When that brewery was bought out in the 1980s he set up another one, brewing the same witbier but under the name Celis White.

At a first sniff and sip, these beers seem very alike. Both have the aroma of coriander (think ground coriander, not fresh), a touch of citrus and orange peel in the flavour, and a light body and crispness with low bitterness, which is typical of the style. Both have lovely frothy heads with great lacing – one a deep golden-yellow colour; one a more straw yellow – and both with a hint of haziness.

But after a few sips, when the two beers really start to open up, the differences quickly become apparent. A more intense coriander flavour in one; a slightly watery mouthfeel to the other. One seems a touch more carbonated; the other with a drier finish. And most definitely – and without knowing which was which – one becomes more complex and interesting, quickly becoming my favourite.