Used by the ‘Star Wars’ production crew, this bar is charming – and close to the Skelligs 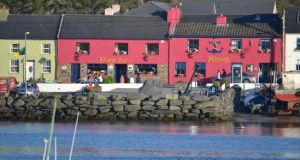 The Bridge Bar at the moorings, Portmagee, Co Kerry: the jumping off point for the Skelligs

As soon as Mark Hamill was filmed pulling pints in the Bridge Bar in Portmagee in Co Kerry, there could only be one pub in Ireland for Star Wars fans. No doubt Luke Skywalker talked his way into more than one hostelry in the Kingdom but the Bridge, with its great location at the village moorings where the boats leave for the Skelligs, can rightly claim to be the one true local for the Resistance.

Once the movie’s production team stopped pretending they were in town to shoot a documentary on puffins (which the locals never believed anyway), they took over owner Gerard Kennedy’s family sitting room upstairs and turned it into their production office. Throughout the shooting for the two Star Wars films, the cast and crew made the Bridge their home.

The pub is rich with characters, music, set dancing and great food on any day of the week – but throw in the cast of a Hollywood movie and the place must have been on fire.

The Bridge was in Gerard’s wife Patricia’s family originally and they took over 27 years ago. They’ve turned a small, drinking man’s pub into a true destination pub and the restaurant and accommodation they’ve built next door is thriving and winning accolades every year.

It’s a place that’s hard to leave – unless your destination is the Skelligs themselves, a 12km trip by sea that is often a hostage to the weather and the tides.

They love receiving guests and will go out of their way to make things go your way. They’ve developed a special Skelligs package for Star Wars fans but you’ll need to be quick – bookings are already flying in. moorings.ie

Protein powders: What are they and do they work?
10

Do Irish people hate babies? Our irritation with them is embedded in our culture
Real news has value SUBSCRIBE