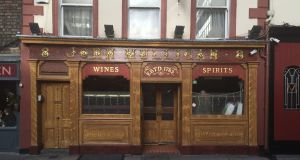 This proud Dublin pub has woven itself into the very fabric of the city and remains a loyal anchor for anyone adrift on its shores.

It’s in the hands of the Cusack brothers now, Ger and Gary, who have stayed true to their father Tommy’s vision. Just as he would have done, they trust one of their long-time regulars, Peter Roche, to tell me its tale. A stroll through Peter’s life puts Mulligan’s centre-stage, a second home in which friendships have been forged at every turn.

Born in a tenement near Holles Street, a career with Iarnród Éireann kept the 72-year-old close to his favourite bar. He had his first pint here at 19 and courted his wife Cora under its roof – although it was 24 years before he proposed.

Journalist Con Houlihan called him the PRO of Mulligan’s, while friends now call him the Doc. Sitting with him as sunlight cuts through this historic bar, it is exciting to hear him pull memories from the air.

He was here the day the ashes of an American customer were hidden in the grandfather clock. He watched as the Theatre Royal fell and staff from the Irish Press had their last stand. He saw singer Liam Clancy being reminded it wasn’t a singing pub and recalls hearing Welsh rugby choirs break the house rule every year. He has made more friends and attended more Mulligan’s funerals than he can count.

One day a man came in with a flyer advertising for extras and suddenly he was on the set of The Tudors – and then brought the famous cast back to the pub.

His warmest memories are for the staff: the day barman Noel Hawkins began, a teenage Gary Cusack cleaning glasses.

Peter and his comrades have forged a Dublin institution. It is a life well lived.