The tourist attraction has been transformed into a luxury penthouse, for one night only 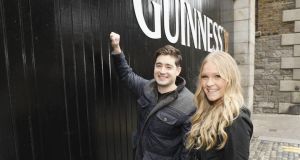 New Yorker James Morrissey and his wife, Kaitlin, arriving at the Guinness Storehouse to spend the night in a specially created 'bedroom' in the Gravity Bar

If Guinness designed penthouses . . . they’d put one in the Gravity Bar, hire Irish craft and design talent to transform the space, lay on a six-course tasting menu for dinner, and a butler to pour the (unlimited) pints.

That is what awaited New Yorker James Morrissey when he checked in at 2pm today for his overnight stay in Dublin’s highest bar, at the Guinness Storehouse. Morrissey will become the venue’s first overnight guest having won the opportunity in Airbnb’s “Night At” series, which invites users of the accommodation booking service to “win the sleepover of your dreams”.

More than 40,000 people worldwide entered the competition to have the keys of the Gravity Bar overnight when it was listed for one night only on the Airbnb website in March.

Morrissey’s answer to the question “What makes you the world’s biggest Guinness fan?” stood out as it “captured the true character of St. James’s Gate which is filled with hundreds of years of history,” said Paul Carty, managing director of the Storehouse.

Other winners have been accommodated at a variety of unusual locations, including underground in the Paris Catacombs, and at the top of an Olympic ski jump in Norway (that one led to a marriage proposal).

The St James’s Gate landmark has been transformed for 24 hours into a luxury residence, complete with “perfect-pint”-shaped bed, for Morrissey and his wife Kaitlin. Interior designer Graham O’Donnell transformed the space using a mixture of contemporary Irish craft furniture and artefacts from the Guinness archives.

To keep the guests amused, there is a pool table, life-sized Jenga and a telescope, so they can make the most of their night under the stars in the seven-storey visitor attraction with its floor-to-ceiling windows.

Tomorrow, after an Irish breakfast, the couple must hand back the keys – and take the lift back down to reality.

Eating out with the kids? Here are some real gems
4

Health Hints for the Home: Worms in children
6