What will you be wearing for spring/summer? Arnotts has answers 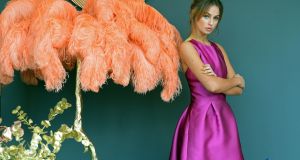 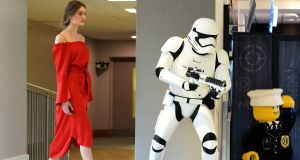 The season’s big trend – florals – was much in evidence at the Arnotts Spring-Summer 2017 fashion show, held at its Henry Street HQ in Dublin on Tuesday.

The show, with more than 70 outfits styled by Sinead Keenan, offered a broad mix of international mid-range brands including a number of Irish labels divided into seven self-explanatory themes such as “modern uniform”, “summer blossom”, “new nautical” and showcasing accessory arrivals including Kate Spade bags.

The season’s big trend – florals – was abundant on dark or light undertones from fluttery mid-calf chiffon dresses by Whistles (€420) to long Chinese appliqued floral maxis from Miss Selfridge (€85), spreading right into jumpsuits (Tara Jamon €299) and blazers with matching trousers (Hobbs €360 and €155) – all easy on the eye on svelte figures though not always quite as easy to wear for the average woman.

Many dresses were “cold shouldered”, such as a navy number by Mint Velvet (€135) or a red Marella dress (€262), a style demanding strategic underpinnings, as did the breezy and beautiful strapless cotton dress from Ralph Lauren (€249) and an off-the-shoulder variation by Tara Jarmon (€310), both in summery blue and white striped cotton.

Though it’s a girlie season, many safe generic items, such as bomber jackets and trench coats were refreshed in summer pastels or embroidered silks. Typical was a navy appliquéd bomber from Marella (€268) with navy floral skinnies (Ted Baker €145) or a trench with blazer, shirt and shorts all in Melania Trump baby blue (€499, €479, €49.95 and €229).

The more elaborate decorative dresses that ended the show seemed aimed at events in which Ganni’s emerald green beaded shift (€699) or trousers (€549) with gold gladiator stilettos might not look out of place. Less ornate was Niamh O Neill’s stiff standaway dress in fuchsia silk (€495).

Some easygoing combinations were striped linen trousers from Whistles (€200) with an embellished black linen coat (4760), a sporty navy jumpsuit by Luisa Cerano with go faster stripes (€330) and the Polo Ralph Lauren combo of blue and white knit (4299) with Marella anchor print trousers (€156).

Black and white graphic print trousers (J Lindberg €185) were teamed with a black leather biker jacket (IKKS €395) – that everyday street staple that can toughen up the fluttery dresses, tone down the blown out prints and add nonchalance to mixed separates.

Arnotts’ new womenswear buying director, Valerie O Neill, who now combines that role with menswear, said that changes were on the way for a greater expansion of women’s fashion at the store. “We are trying to make a statement with brands because we have a big footfall here – seven million people a year,” said O Neill.

Food myths busted: Are coffee and salt so bad for us? Are calorie counts worthwhile?
4

What can €120k buy you in Italy, Greece, Cyprus, Lithuania and Louth?
7